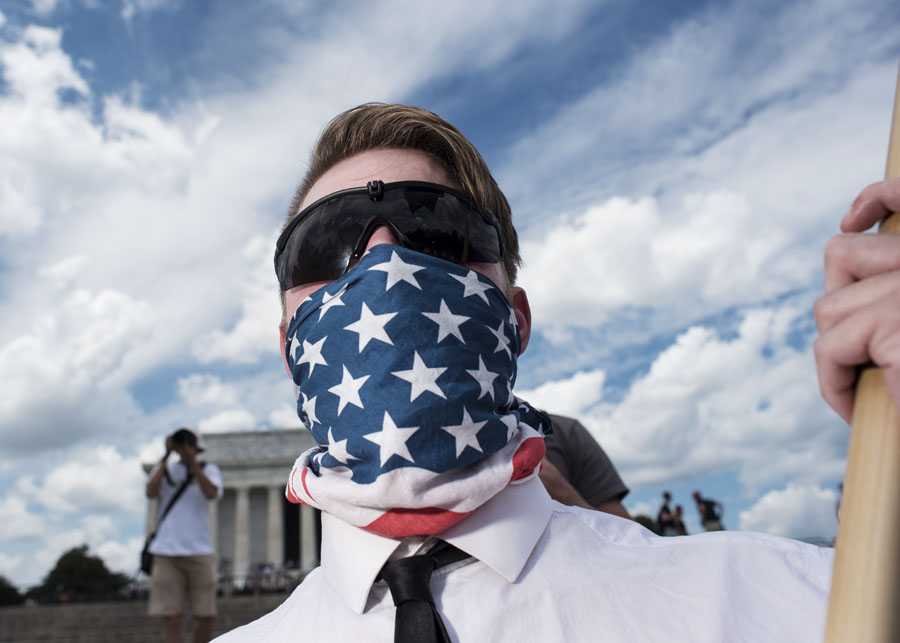 Make sure to “hide your power level”

The ugliest instances of today’s far-right resurgence — Charlottesville, the Muslim ban, the Quebec City mosque shooting, the surge in hate crimes, etc. — often belie a more fundamental urge from which all such examples ultimately spring: an ever-breathing struggle to smuggle fascist, racist and discredited ideas back into the mainstream.

There are several ways to do this: electoral politics, attacking “political correctness,” online organizing, exploiting mass media, etc. But the single thread that runs through these methods — one that lies just beneath the sheer spectacle and cacophony of today’s politics — is simple, unadulterated deception.

Imagine for a moment that you’re an active alt-right figure trying to exploit the moment and have your 15 minutes of fame in the mainstream.

You’ve pushed the envelope enough that people are starting to ask you about your beliefs and the media is wondering how you feel about things like White supremacy. If you’re not careful, these questions might “out” your true opinions. And, so, pushed into a corner, you do what everyone seems to do when they’re in such a predicament: lie.

I don’t think that the printed word here is capable of demonstrating just how common, accepted and ubiquitous this kind of dishonesty has become. I don’t mean the dog-whistle politics that uses euphemisms like terrorism or immigration or crime to galvanize constituents who eventually absorb/interpret such terms through much darker, racist sentiments or emotions.

We’re way past that. What I’m referring to is much more straightforward. It’s what one particular, run-of-the-mill alt-right bro on 4Chan referred to once as “hiding your power level” (appropriated from a scene in the Japanese manga/cartoon “Dragon Ball Z”).

In other words, keep your true, racist beliefs covert. Just lie about your opinions on whatever it is you’re asked about: race, gender, Muslims, Jews, etc. Don’t reveal your actual beliefs (i.e., how racist you actually are) until you’re sure that no one’s looking, the walls are soundproof and you’re among your “own people.” When asked, just say to the public that you’re not a racist.

Like Milo Yiannopoulos did plenty of times as he shot into mainstream fame (and fizzled out just as spectacularly) and a $250,000 book deal. Then, when he thought no one was looking, he had his Breitbart drafts edited and vetted by White nationalists and prolific racists.

Or like Faith Goldy, who says time and again that she’s not a White supremacist, but then showed up at a Unite the Right rally in Charlottesville, Virginia, and spoke on a Daily Stormer-affiliated podcast.

And it’s not just the alt-right. John Derbyshire, considered a respectable conservative voice for years at the National Review — itself a mainstream right-of-center periodical — claimed for some time that his views weren’t racist before getting fired in 2012 and moving on to VDARE, a White nationalist outfit.

And the list goes on. It’s almost boring to recall such examples because they’re so ubiquitous. The phenomenon has become banal.

But the point is that such tactics work until they don’t. And they only truly fail if you’re stupid and do something that exposes your “power level” in some undeniable way (like appearing on a White nationalist podcast). However, if you’re smart, you’ll know just how far to push the envelope without playing yourself.

Feel free to call Muslims terrorists, Blacks criminals, Arabs backward, Mexicans lazy, women inferior, etc. But when questioned, just say your words were taken out of context or, if not, then repeat ad nauseum that you condemn all racism, even if doing so is absurd given your prior comments.

In other words, just lie. This tactic is to the far-right what dribbling is to professional basketball players. The latter’s goal is to win a ball game; the other tries to funnel discredited, racist ideas back into the mainstream by becoming an accepted voice within that mainstream. To shift Overton’s Window, if you will, toward your end of the spectrum.

Like I said, pointing all this out is like talking about the open secret about that one kid in high school. For most, it’s not even worth mentioning. Such is the benefit of hiding in plain sight. Nobody questions the status quo and the noise level dies down.

In this case, the “I’m not a racist”/“I condemn all White supremacy”/“I have a Black friend” answers become more and more acceptable despite examples and evidence that clearly point the other way.

Maybe it’s the sound-bite culture that makes this possible, as the spoken phrase takes center stage much easier than historical facts — even if it’s very recent history. Words spoken in the immediate moment displace the past and, in today’s culture, render it uselessly inert.

Yet it tells us something about the way intellectual culture works in the Trump era, when far-right ideas posture assertively. It tells us that free speech includes the option of lying as many times as is necessary to cover your bases, and that as long as no one asks and someone doesn’t leak your emails, nothing bad will happen.