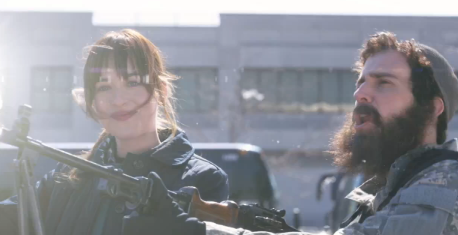 It’s ok to poke fun at terrorist groups. Last weekend, when Dakota Johnson starred as a young woman being escorted to ISIS fighters in a Saturday Night Live skit, she proved to her viewers that mocking the terrorists is the way to combat them. If you can’t and shouldn’t join them, then laugh out loud. The Muslim world has been doing it for decades in an effort to discredit, delegitimize, and disorient terror groups acting and killing in the name of Islam.

Years ago, as the first Muslim American woman who served in the Counter-Terrorism Center in the U.S. Government, I gave briefings to senior U.S. policymakers and practitioners to help them understand the power of the message. Creatives call this a storyboard. I refer to the message as a ‘sound bite of resistance.’ I understood then what holds true today. That the U.S. government at large has failed to create and deliver a powerful narrative that can be used to disgrace and denounce one of the world’s deadliest terror movements. However, rather than focus on what we didn’t do, I believe we have a unique opportunity to craft an anti-ISIS propaganda campaign, if we watch and learn from the way Muslims laugh at their-own-backyard terrorists.

In the Arab world, ISIS is featured in the media as the antithesis of Islam. The most popular program on Iraqi state television titled Dawlat al-Khurafa [State of Myths] features comical songs and skits to show “how ugly these people are,” said a lead actor, referring to ISIS. Set in a mythical Iraqi town, the show compares to South Park and Looney Tunes. Lebanese and Palestinians have their own TV shows to ridicule the terror group and a play in Jordan is now playing in theaters. With satire, the hope is that the media can act as a weapon against the ISIS narrative of hate and false promises, including love-followed-by-marriage and a chance for martyrdom.

Even in the United States, Muslims have used satire to bring attention to key issues. Two years ago, I went to the “Allah Made Me Funny” show held in Washington, D.C. and rolled over as the Chicago native, Azhar Usman with a bushy beard and dark-skin, compared Osama bin Laden to Tupac.

Along with satire, Muslims are battling ISIS with other media tools with unforgettable characters. In Jordan, Suleiman Bakhit created a comic book series to endorse Muslim male and female heroes as an antidote to extremism—the best-selling comic book creator of Aranim Media Factory sold 1.2 million copies in 2010. Depicting male and female role models, including an all-female counter-terrorism unit, gives the youth “a sense of purpose, sense of identity and adventure in life [that] can be achieved by service to others by resilience by hope, not violence and hate.” Bakhit’s mythology offers the Arab Muslim youth an alternative story to the ISIS jihadi ideology—this is eerily similar to the “99” cartoons, the world’s first Muslim superheroes launched in 2007 by Kuwait-based Dr. Naif al-Mutawa, who intended for each character in the series to represent one of God’s 99 attributes—the young people in the cartoons work together to fight evil, prevent disaster and help those in need.

Whether Muslims choose to laugh or be inspired, it’s clear that Muslims understand that media and other communication strategies can slowly devalue ISIS by attacking its messages, mythologies and stories.

Laughter and poking fun at terrorists can be a powerful strategy to counter their message, but it is a long-term process. For now, at least the Muslim youth have Muslim heroes and heroines to counter the ISIS villains.