The Man Who Took John McCain into Syria

Even though I had known about his work for some time, the first time I met Mouaz Moustafa in person was a few months ago in June 2013 at the Brookings Institution U.S.-Islamic World Forum in Doha, Qatar. Only a few weeks earlier, Mr. Moustafa had successfully helped United States Senator John McCain (R-AZ) enter into Syria from Turkey to meet with members of Syrian resistance rebel forces.

As the executive director of the Syrian Emergency Task Force- an American nonprofit that helped organize the McCain trip- Mouaz Moustafa played an integral role in bringing Senator McCain into Syria and he recently spoke to me about how he was able to successfully bring McCain into a civil war in one of the bloodiest hotspots in the Middle East today.

“In my work as executive director for the Syrian Emergency Task Force and Political Director for United for a Free Syria, I am regularly on Capitol Hill advocating on behalf of the Syrian People,” Mouaz Moustafa told me during an interview explaining the beginnings of his interactions with the Arizona Senator’s office. “Senator McCain has [always] been very involved in Middle East affairs and has stood by the Syrian People’s revolution and so we had met the Senator and his staff in the past to discuss US Policy and Syria.”

When it came to actually visiting Syria in the midst of a civil war, Moustafa made it quite clear that it “was Senator McCain’s decision to go to Syria” and that the Syrian Emergency Task Force was “honored to be given the responsibility of coordinating his meetings with commanders from the Free Syria Army in [both] Turkey and Syria.”

In terms of actually safely getting Senator McCain into Syria, he mentioned that the “route to Syria was in a car convoy from Gaziantep [in southeast Turkey] to the Killis boarder crossing and into Syrian territory.” According to Moustafa, all together there were three separate meetings with Senator McCain and rebel forces. 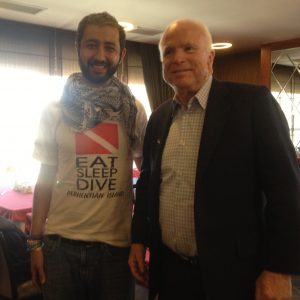 Moustafa and McCain in Syria.
Photo courtesy of Mouaz Moustafa.

The first meeting with McCain included 10 rebel commanders including General Salim Idriss, who is the Chief of Staff of the Supreme Military Council (SMC) of the Free Syrian Army, which is the primary Syrian umbrella rebel group. According to Moustafa, Senator McCain was the only person from the American side to engage in conversation with the FSA Commanders.

He said that the main conversations between Senator McCain and rebel commanders revolved around Iranian interference in Syria, as well as the increased presence of Hezbollah and the threat of future extremism. (Mr. Moustafa served as primary translator during these meetings with Senator McCain).

“The Senator and the Commanders had a great conversation which ended with Senator McCain promising not to rest until he can get the US government to show leadership in supporting the revolution and protecting the Syrian People,” Moustafa later concluded about the meetings.

According to him, Senator McCain “came away with a much more thorough understanding of the conflict and the situation on the ground.  He was reassured that the United States Government has vetted the ‘good guys’ that we must support [in order to] to defeat the regime and marginalize any extremists.  The Senator saw the challenges faced by the Syrian people against this oppressive regime and spoke to the Free Syria Army [officials] that have defected from the Regime’s army and took up arms to defend their families and the Syrian people.”

In his opinion, Senator John McCain came back to the United States “a much more informed and stronger advocate for the Syrian cause and this visit brought much needed media attention to the conflict in Syria,” said Moustafa. “I believe that the visit also brought greater pressure on the Obama Administration to have greater leadership when it comes to the situation in Syria.”

Even though the unnecessary bloodshed of the Syrian civil war still continues, if there is going to be any peaceful solution to the ongoing conflict, it is going to be people like Mouaz Moustafa who are going to be a part of the solution since he was the first person who was able to successfully take an American senator into Syria.