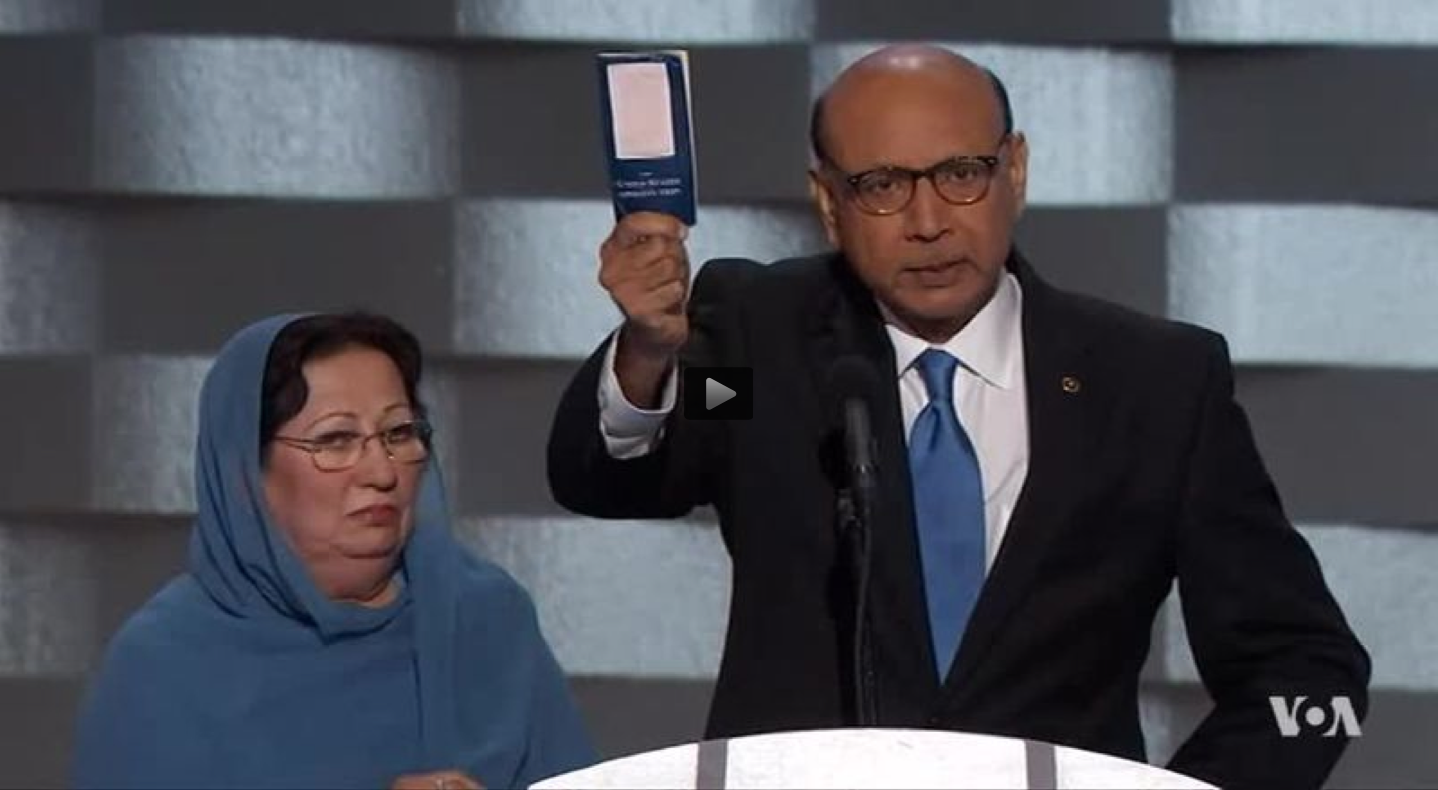 The Wrath of Khan

Khizr Khan’s speech at the 2016 Democratic National Convention shook up the evening perhaps like no other. Side by side with his pillar of support, his wife Ghazala, the two stood as parents of the fallen Humayun Khan, a U.S. soldier who was killed in Iraq defending American troops. After a video memorial of his son, his father delivered a mouth-dropping lambast that shot to the core of Trump’s political platform and challenged the idea that the United States is as bad as Trump says.

Khan’s message was direct and forceful, and as theatrically memorable as politics get. Perhaps the most basic fact was the couple’s sincerity. Ghazala stood by, staring at her husband with the look of a mother’s pain, and Khizr was a genuine rookie amid a lineup of polished speakers as he bumped the microphone and nearly bumped his wife delivering his message. Yet despite their inexperience in front of lights and cameras, the moment was genuine and had audiences in tears.

Khan’s message began at the beginning:

Like many immigrants, we came to this country empty-handed. We believed in American democracy; that with hard work and goodness of this country, we could share in and contribute to its blessings. We are blessed to raise our three sons in a nation where they were free to be themselves and follow their dreams.

Khan’s message mirrored a theme that first lady Michelle Obama laid out when she spoke on the opening day of the convention. She took the audience into her world as a Black woman who wakes up in a house “built by slaves,” who gets to watch her daughters “play with their dogs on the White House lawn.” Her message was a direct rebuke to Trump’s negative broadcasts about the country: “So don’t let anyone ever tell you that this country isn’t great, that somehow we need to make it great again. Because this right now is the greatest country on earth!”

Like the first lady, the Khans stood as witnesses to the greatness of the United States. As Khizr declared, they came to the country with “empty hands,” but because of diligence and American freedom, their children got to pursue their dreams. From his and the first lady’s perspective, the United States remains a wondrous place where the American Dream still survives and thrives. This is the force behind immigration in the first place — people dreaming to come to the country — which interferes with the nightmare Trump is trying to paint.

Such stories temper Trump’s doomsday descriptions of the country. The Trump campaign must sell fear and loathing to Americans, and so it has chosen national security and immigration as focal points. Indeed, when it comes to Muslim immigrants, Trump has supported ironclad immigration bans. This position must be rigid because immigrant success stories offer the strongest counter-narrative to his political platform. People from all over the world risk all sorts of consequences to defect to this country. Immigrants go to death-defying lengths to make it to American shores, which is a constant reminder of how good it is in America.

In addition to shattering the “Make America Great Again” slogan, Khan’s speech also exposed Trump’s debilitating white privilege. Trump’s bleak portrayal of the country sounds like a big whine. However, the rhetoric is swallowed up by the fact that Trump stays in the best places in the world wherever he goes. He has never lived in a third-world slum, as a refugee, or under political dictatorship. He has no clue about what America means to the underclass of the world, and why so many give up everything just to enter the country. Trump’s marriage to an immigrant only highlights the hypocrisy.

Khan and the rest of the immigrant story stand as the greatest counterexample to Trump’s vision of the country. The American Dream is still alive and being experienced in ways that make this country the center of many peoples’ universe around the world. Trump’s campaign to vilify immigrants silences their symbolic meaning in society as a stream of hopefuls who are willing to take on practically any employment available to become a part of the system.

The Khans’ appearance at the DNC will stand in many people’s memory as a great effervescence. For Muslims, the moment was momentous, as one of their own stood up with utmost sincerity to plead for voters to choose Clinton and not the “divider.” At the same time, it exposes a candidate whose life has been too good for his own good. Trump is trying to tell a story that conflicts with the ongoing desire of people around the world to come to America, lawfully or otherwise. Trump must do everything he can to undermine this basic truth, which threatens to pull the platform rug from under his feet.