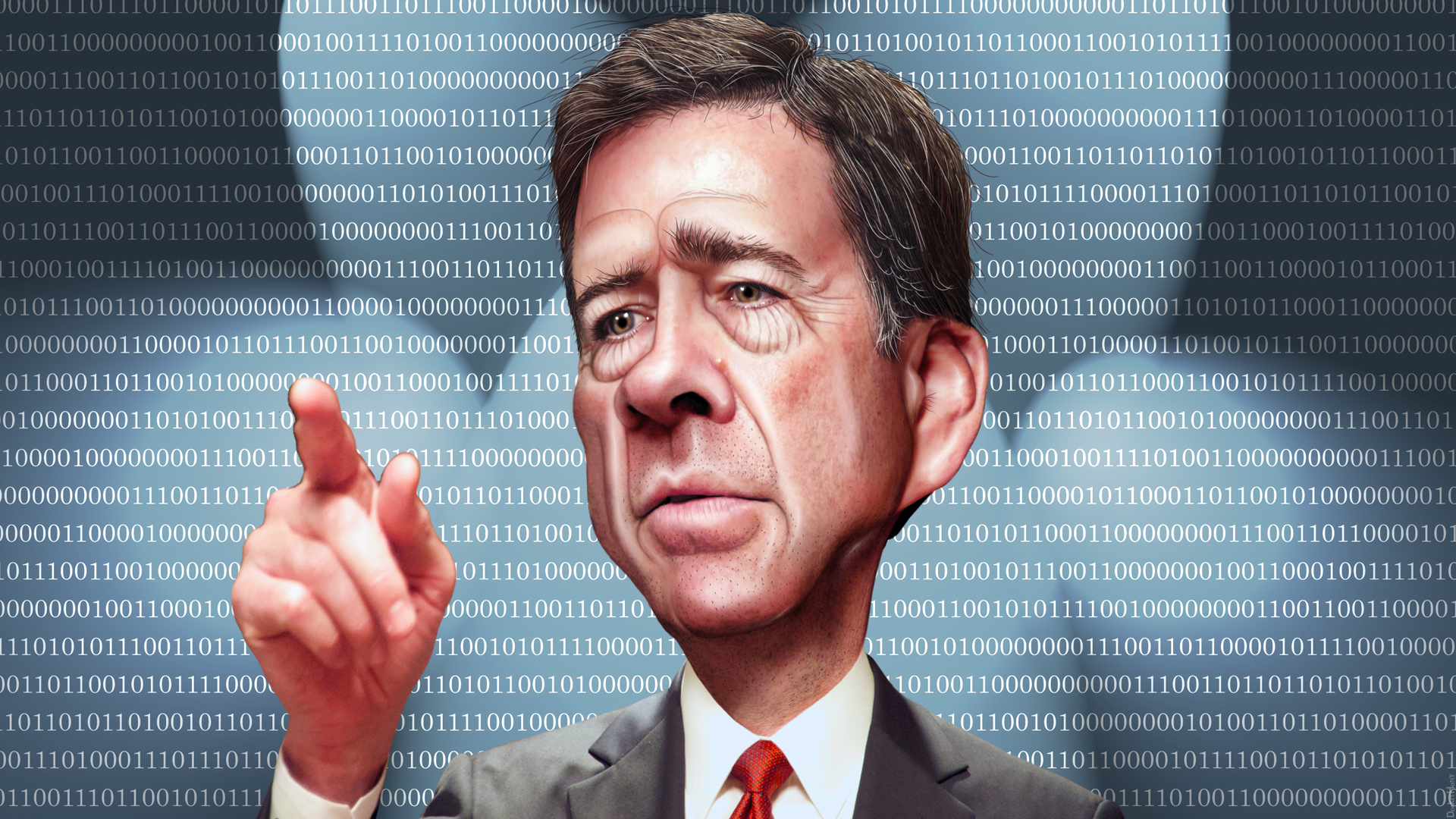 45 Watch: The Descent into Chaos

According to chaos theory, uncertainty increases exponentially the further in time one tries to forecast an action or behavior. Applying this element of chaos theory to the current administration means there’s no limit to the crazy still in store for us over the next four years.

The latest entry in the “this can’t be really happening” file, was the abrupt firing of FBI Director James Comey on Tuesday. In a three-paragraph letter, Trump dismissed Comey at the behest of U.S. Attorney General Jeff Sessions and Deputy Attorney General Rod Rosenstein. However, Comey didn’t learn of his termination via the letter. He learned of it from a TV screen while speaking to FBI recruits in Los Angeles. When the screen, which was behind him, was brought to his attention, he thought it was a great prank.

The speed and unprofessional nature of the firing has led to a firestorm of theories speculating on the real motive. For as the renowned Swiss psychologist, Carl Jung, wrote, “In all chaos there is a cosmos, in all disorder a secret order.” Let’s take a look at the prevailing theories and see if we can find any meaning in the midst of such madness.

Theory 1: Comey simply was bad at his job.

Comey didn’t have many fans. Democrats were furious at him for announcing a new investigation into disgraced former Congressman Anthony Weiner’s laptop and its connection to Hillary Clinton’s email scandal a mere 11 days before the presidential election. (No connection or criminal wrongdoing was found. Even Comey’s claim during his Congressional hearing that Huma Abedin, Clinton’s aide and Weiner’s wife, “forwarded hundreds and thousands” of emails to Weiner’s computer, was incorrect.)

However, since this theory is the official administration stance, it should immediately be viewed with skepticism. Even worse yet, the administration’s story keeps changing. First, the decision to fire Comey was pinned on Deputy AG Rosenstein, who wrote a memo chastising Comey for closing the initial Clinton investigation and then holding a press conference to reopen it.

This was followed by Sean Spicer stand-in, Sarah Huckabee Sanders, claiming Comey’s termination was a result of procedural, chain-of-command “atrocities” committed by Comey in his Clinton investigation. She then stated that the most important reason for his firing was that “the rank and file of the FBI had lost confidence in their director.”

Then Trump said he was going to fire Comey, “regardless of the recommendation” from the AG’s office, claiming Comey was a “showboat” and a “grandstander.” The shifting story continues to fall apart as it was found out that Rosenstein almost resigned out of anger when he heard Comey’s dismissal was attributed to him, while the current acting FBI Director, Andrew McCabe, testified before the Senate that Comey “enjoyed broad support” from the “vast majority of FBI employees,” directly contradicting Sanders.

It’s clear this theory is pure spin and propaganda from the administration and can’t be taken seriously.

Theory 2: Comey was dumped to halt investigations into Trump’s Russian connections and his taxes.

This theory may be the juiciest. It involves international spying, lies, loads of money, possibly urinating Russian sex workers, unreleased tax returns and the general selling and dismantling of American democracy. As tracked in a previous column, Trump has numerous financial ties to Russian businesses and billionaires.

On March 20, Comey confirmed in a House Intelligence Committee hearing that there was an ongoing investigation into Russia’s interference in the 2016 U.S. presidential election along with “any links between individuals associated with the Trump campaign and the Russian government.” One of the most damning links is Trump’s ex-National Security Advisor Michael Flynn, who was forced to resign after his conversations with Russian ambassador Sergey Kislyak were revealed. Since then, Flynn has asked for immunity in exchange for his testimony. Not only has the Senate Intelligence Committee denied his request, it subpoenaed him to force him to talk about his discussions with Russian officials.

That’s not Flynn’s only controversial connection. He also was working for Turkish interests at the same time he was actively involved in Trump’s campaign.  One of Flynn’s goals was to find a way to kidnap Fethullah Gulen, a Turkish exile living in Pennsylvania, and return him to Turkey to face charges of, and most likely execution for, attempting to overthrow Turkish President-cum-Dictator Recep Erdogan in a coup.

Despite Trump’s attempt to blame Obama for not vetting Flynn properly, none of this should be a surprise to the Trump administration. Not only did Obama fire Flynn and warn Trump about Flynn’s improprieties during their meeting after the election, but so did former acting Attorney General Sally Yates. After Vice President Mike Pence declared on TV in January that Flynn hadn’t done anything wrong, Yates told the Trump White House that she had evidence of compromising behavior on Flynn’s part that could leave him open to blackmail. How did Trump respond? He fired her – along with the head of immigration enforcement, in what was coined the “Monday Night Massacre,” which ended a purge of the State Department that left it and the survivors in shambles.

On Monday, in what was thought to be the most important story of the week (Lord, how quickly Trump can change the news cycle), Yates spoke to the Senate, where she intelligently fought off a weak attack by Ted Cruz and provided damaging details on the current administration’s handling of the Flynn debacle.

Flynn’s possibly illegal incompetence and Yates’ testimony, in addition to Comey’s recent request for more resources to investigate Russian connections, have led many to believe Trump fired the FBI director to prevent his true ties from being revealed.

The main problem with this theory is that getting rid of Comey doesn’t automatically stop the FBI investigation. Removing him has only brought more attention to the investigation, raised the ire of current FBI employees and brought about new demands of handing the investigation over to a special prosecutor. However, one can never rule out the possibility that Trump is dumb enough to believe removing Comey would remove his Russian troubles.

Like any great fascist dictator, Trump highly values loyalty. Members of his administration know that’s the key to hold a job. He’s had a difficult time filling positions in his administration due to suspicions concerning lack of fealty, and even decreed May 1 to be “Loyalty Day.”

Comey was disliked by both sides of the political aisle and never seemed to prove his loyalty to any party or politician. In turn, unable to make Comey pledge allegiance to his self-delusional greatness, Trump eliminating Comey fits with his personal character: an arrogant narcissist with skin as thin as it is orange. It also explains why Comey’s termination was done without any apparent strategy, planning or general preparedness. The only thing getting in the way of this theory is the optimistic disbelief in our government being led by an ignorant buffoon surrounded by incompetent sycophants.

The truth, while not always clear, is usually somewhere in the middle, as some combination of all three above theories provide a more accurate picture. But what we can be sure of is that the utter chaos of this administration is spinning out of control, growing in mass and speed, hurtling downhill like the proverbial snowball. But instead of snow, think of ever-accumulating feces.

That big ball of feces is heading for us, bowling over basic expectations and etiquette we once implicitly held politicians to — like not being so unabashed in your aggrandizement, lazy in your lies, vocal in your sexual harassment, obliviously inept. This descent into chaos accelerates as we witness the Trump family and its many tentacles directly profit from office, either through violations of the emoluments clause, clothing sales, book launches, real estate or even quid-pro-quo visa deals.

We may not even be close to the rock bottom — the lowest possible level of descent — that has haunted the majority of the American public since Trump first slowly glided down that gaudily gilded escalator to announce his campaign. The growing chaos has multiplied exponentially as we all struggle to find some semblance of order in such devastating disorder.

If any of this scares you, just remember: You’re not alone. Even Sean Spicer is hiding in the bushes. Hopefully, he and the rest of the administration will soon trade in the bushes for a large rock within the deepest abyss of the darkest chasm in the ocean, crawl under it and disappear for good. Until then, don’t go mad looking for meaning in chaos. Find solace in the sardonic words of Vladimir Putin, who when asked about Comey’s termination, while garbed in full ice hockey gear, responded: “President Trump is acting in accordance to his competence.”

That sounds about right.