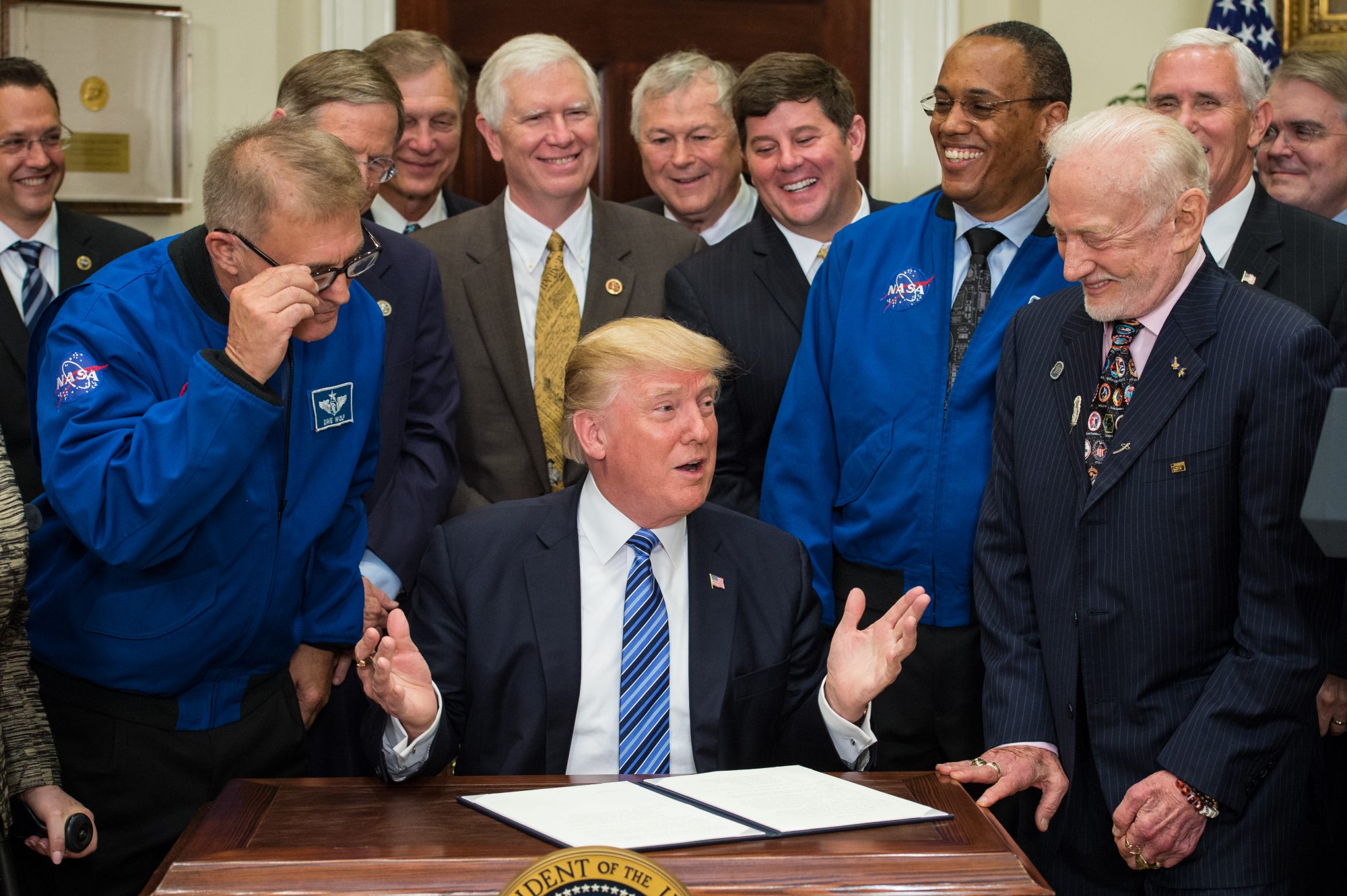 45 Watch: To Incompetence and Beyond

Almost 48 years ago, on July 21, 1969, Buzz Aldrin hopped off Eagle, the Apollo 11 space mission’s lunar landing module, and joined Neil Armstrong as first humans to step foot on the moon. Experiencing the pinnacle of science, technology and human resolve, Aldrin, responding to Armstrong who had already disembarked Eagle and was slowly exploring the immediate area, described his momentous view as “magnificent desolation.” In an occasion that would leave most humans speechless, Aldrin responded with a poetic meditation on the vast emptiness of the moon’s surface and the even more immense space in which it was surrounded.

It wasn’t until a few days ago that Aldrin would find himself in another situation of vast emptiness that would leave him truly speechless. Listening to Donald Trump incompetently prattle on at the signing of an executive order to reinstate the National Space Council on Friday, Aldrin’s facial reactions shifted from affable perplexity to sneering contempt, and everything in between. If Aldrin’s expressions were translated to words, “magnificent desolation” would no doubt be chosen to describe the barren landscape of Trump’s mental capacity.

As a seated Trump signed the executive order, Aldrin interjected with “to infinity and beyond,” drawing laughter from the crowd in his reference of animated character Buzz Lightyear in the Toy Story movie franchise whose name and occupation drew inspiration from Aldrin.

The reference was lost on Trump. “This is infinity here. It could be infinity. We don’t really don’t know.  But it could be. It has to be something, but it could be infinity, right?” Trump incomprehensibly responded. The staggering stupidity of that statement, majestic in inept idiocy, “magnificent desolation.”

Trump is not simply stupid; his wealth of arrogance and vapidity also give his incompetence a haute grandeur. The emptiness of his critical thinking skills and communication skills are truly magnificent, splendidly exceptional.

Consequently, the phrase Aldrin uttered on the surface of the moon can now also describe the state of our republic. As we Americans celebrate our 241st year of independence, let’s revisit the words of one of our greatest heroes: Frederick Douglass. Even though Trump clearly has no idea who he was, Douglass’ words are just as relevant today as they were 165 years ago.

On July 5, 1852, Douglass delivered one of the greatest speeches in American history to a room of abolitionists at the Ladies’Anti-Slavery Society in Rochester, New York. The speech, which is commonly referred to as “What to the Slave is the 4th of July,” excoriated American leaders and institutions, from the Founding Fathers to government and the churches, for practicing the greatest of hypocrisies: celebrating freedom and independence while allowing the proliferation of the inhumane slavery of the Black population.

“I am not included within the pale of this glorious anniversary,” Douglass exclaimed, in reference to the previous day of July 4 celebrations. “Your high independence only reveals the immeasurable distance between us. The blessings in which you, this day, rejoice, are not enjoyed in common. The rich inheritance of justice, liberty, prosperity and independence, bequeathed by your fathers, is shared by you, not by me. The sunlight that brought life and healing to you has brought stripes and death to me. This Fourth [of] July is yours, not mine. You may rejoice, I must mourn. To drag a man in fetters into the grand illuminated temple of liberty, and call upon him to join you in joyous anthems, were inhuman mockery and sacrilegious irony.” 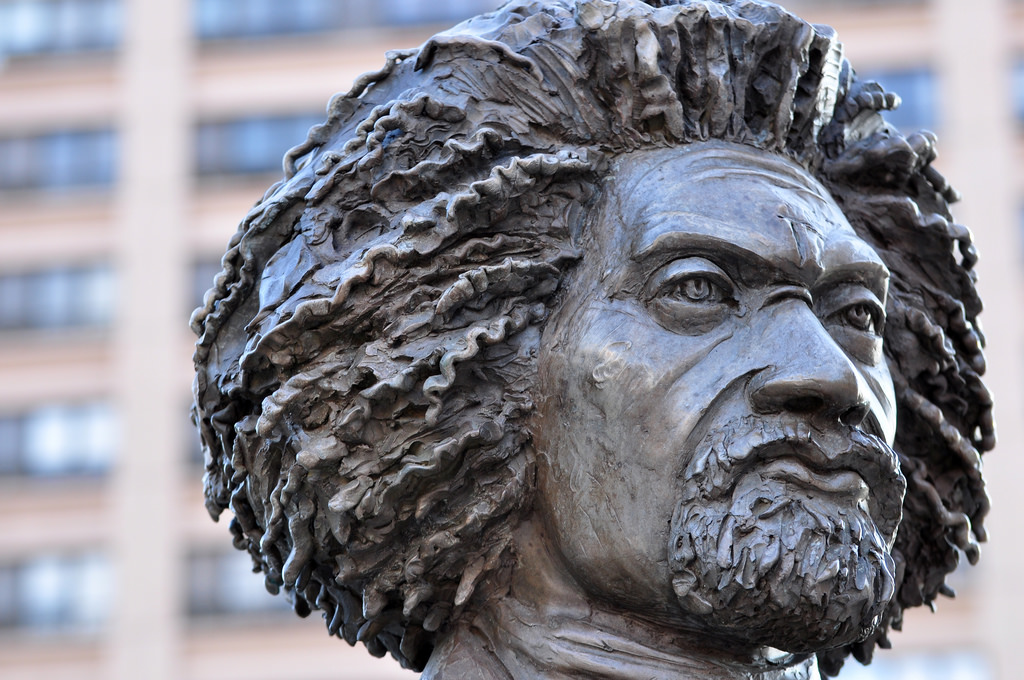 Douglass’ words speak just as loudly today for the Black citizens slain at the hands of police, the women sexually abused at the hands of men like Trump who brag about assault, the undocumented immigrants ripped apart from family and safety, the 22 million Americans who will lose health care access and all the others whose costs will rise, the children whose public education is being dismantled before our eyes, the Indigenous populations whose land and rights are being violently trespassed, and the many, many more citizens of the world who have suffered through our wars of capitalistic conquest and imperial violence. Replace slavery with our current societal ills, and Douglass’ words are just as precise today.

“The existence of slavery in this country brands your republicanism as a sham, your humanity as a base pretense, and your Christianity as a lie. It destroys your moral power abroad; it corrupts your politicians at home. It saps the foundation of religion; it makes your name a hissing, and a bye-word to a mocking earth. It is the antagonistic force in your government, the only thing that seriously disturbs and endangers your Union. It fetters your progress; it is the enemy of improvement, the deadly foe of education; it fosters pride; it breeds insolence; it promotes vice; it shelters crime; it is a curse to the earth that supports it; and yet, you cling to it, as if it were the sheet anchor of all your hopes. Oh! be warned! be warned! a horrible reptile is coiled up in your nation’s bosom; the venomous creature is nursing at the tender breast of your youthful republic; for the love of God, tear away, and fling from you the hideous monster,” Douglass implored.

“The cause of liberty may be stabbed by the men who glory in the deeds of your fathers,” Douglass warned, in an almost prophetic interpretation of Trump’s campaign slogan, “Make America Great Again.” Those who want to return to a bygone era, like the racists and nationalists in his administration and voting demographic, seek to reinstate a history of oppression and injustice against all citizens who don’t fit the White male establishment norm.

In reference to the Founding Fathers and political leaders who idealized a free America, yet implemented its worst attributes like slavery, Douglass said “they were the veriest [sic] imposters that ever practiced on mankind.”

Our leaders today, from the president to congressmen and senators, are the same type of imposters. Trump and his ilk rode into the White House on anti-establishment rhetoric only to buttress the wealthy and big-business interests upon taking office. His congressional flunkies — Paul Ryan, Mitch McConnell, and a host of others — seek to destroy all social services and basic common goods put in place to provide for the poor and middle class, while acting as if they’re serving the needs of the people.

Our country is led by a man who tweets videos of himself partaking in a farcical wrestling match with a prominent news organization’s logo superimposed on the opponent being physically beaten; who uses Twitter to bully and demean television personalities; who encouraged violence at his campaign rallies; who was caught on tape bragging about sexual assault; who paints Mexican immigrants as drug dealers, criminals and rapists; who ignores the suffering of Black people at the hands of police violence and the suffering of Muslims at the hands of hate-fueled assaults; who seeks to defund public education and repeal environmental protections; who aims to provide the extremely wealthy with more tax breaks.

We’re only almost six months into the Trump presidency. If we, the divided people of these United States, allow this raving narcissist to continue debasing our culture and politics, fan the worst racist and xenophobic impulses of White citizens, and to further denigrate and demonize the minority and disenfranchised populations of this country, there will be just as little to celebrate as Douglass so eloquently decried in his speech. Our declaration of independence and professed freedom will become just as empty as the magnificent desolation of Aldrin’s view of space.

July 4 should be an annual reminder to commit ourselves to seeking the implementation of the greatest ideals dreamed by the founders of this nation and brought into existence by the many activists, abolitionists, suffragettes and civil rights protesters, who challenged the establishment for the advancement of society. Otherwise, July 4 will serve solely as a somber eulogy for our democracy and dignity as we propel to incompetence and beyond.

*Image: Buzz Aldrin and Trump at the signing of the National Space Council executive order. >Flickr/NASAHQPhoto.