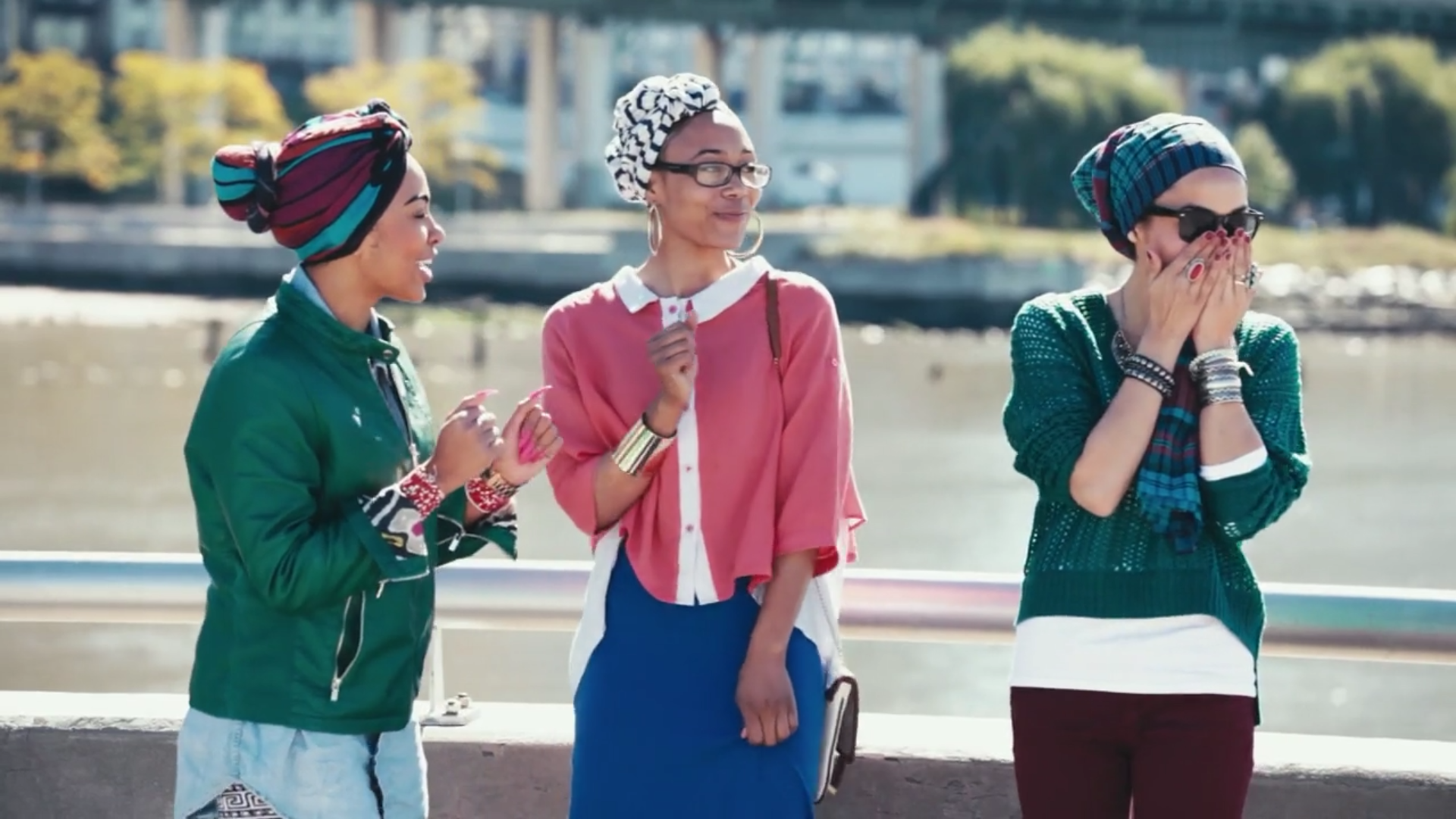 Am I Muslim (American) Enough For You?

Last weekend, I attended a sehri (suhoor) party, sharing a meal with other Muslim Americans in the wee hours of the night before a long day of fasting. We met at a 24-hour IHOP. It was filled with people who were either eating before their fast, or just leaving the clubs. I was thrilled to see so many people in attendance as we took over the back room of the restaurant. There were people under 40, many of them single, from numerous ethnic and cultural backgrounds. I have always enjoyed gatherings like this, as it is an opportunity to meet new people, make friends and enjoy lively conversations and food. Spiritual practices are more pleasurable when there are others with whom to share them.

My husband and I split a vegetable omelet and a stack of pancakes, feeling very full and content. As there were so many people there, I did my best to mingle with those at our table. I met a young chef with dreams of opening his own restaurant, numerous software engineers, a doctor and some students. A young lady next to me was animatedly chatting with a handsome man across from her, so I decided to not join their conversation to give them a chance to know each other better. There was a heated discussion happening on the other side, which I tried, amid all the noise, to try to discern. They were talking about the handful of fanatical people who joined extremist groups (charming breakfast conversation).  Muslims worldwide are blamed for the actions of .0006% of our population who can be labeled as “terrorists.” Many Muslims are wary of such people, as their actions are painted as the potential actions and ideology of all 1.7 billion Muslims.

As I tried to join in the conversation, however, the person who had been leading it turned to me and said, “I find it interesting that you said you are Pakistani. You don’t seem Pakistani. You seem more American.” His unexpected condescension struck me silent for a moment. What was implied with his questioning of my identity was not just culture, but religiosity. I wondered what else he was trying to do. Was he trying to put me in my place as a woman (was he not used to having women included in discussions)? Was he put off by the fact that my husband is White, and therefore American, even though all of us are American? Was I not Pakistani enough for him? I was wearing modest Western clothes and speak with an American accent as I was born and raised here.

Though I could have gone off on this guy, who was not Pakistani himself (discerning from his features, height and accent), I chose to take the high road, utilizing it as a “teachable moment” and going into professor mode. I had no intention of doing a full lecture on identity politics, though I could have since I have a Ph.D. in psychology and am well versed on the subject. I thought that quoting theory was probably more productive than calling this person a jerk. So I picked my jaw off the table, and replied that, “I am Pakistani and American. We all have our own unique identities that form over time, as we have more than one culture that we live in.” 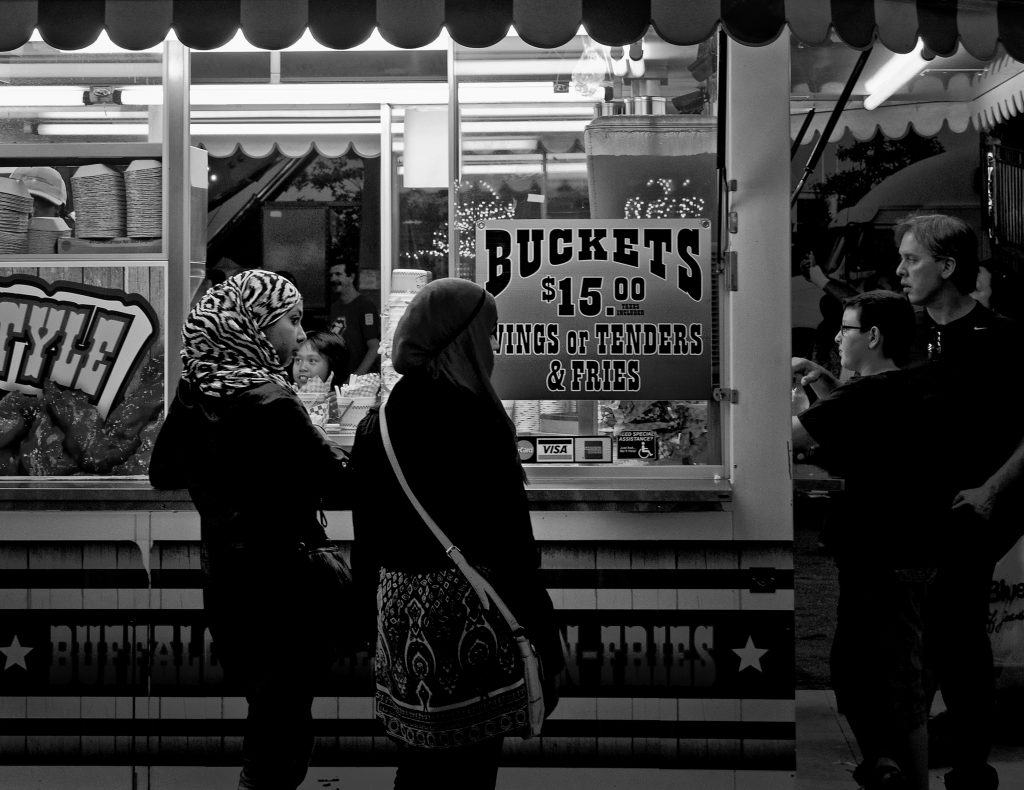 Muslim women at a fair in Toronto. > Flickr/EricParker

I went on to explain the Bicultural Model and acculturation. An immigrant family comes here, and is exposed to a new culture. They could hold onto their traditions and not learn new customs, the language and way of thinking, and run the risk of being marginalized and limiting their social and economic options. They could choose to reject their culture of origin and assimilate completely into the new culture, but they would lose the richness of their language, customs, cuisine and history. This could lead to feeling lost or without roots, and their country of origin would seem more like a far-off land than a place to which one is connected.

There is a third option: becoming bi cultural, in which each individual finds one’s own balance between cultures. This will look different for each person. There will be varying degrees of integration of the language, culture, beliefs, practices, food, fashion, music, dance, film and visual arts. There is much diversity within a single immigrant community and subculture.

I like to look at the Acculturation model as a developmental model as well. Whether someone immigrates to another country, or is the child of those who did, they each have a process of developing their identities. This is especially poignant in adolescence, when people are trying to figure out who they are and where they will receive social acceptance. Usually, by the time we are in our late twenties to early thirties, we know who we are. It is a process wrought with confusion, contemplation and struggle for self-acceptance, topped with trying to receive acceptance from others. This can be worsened by belonging to cultural groups that differ greatly from each other. One runs the risk of receiving acceptance from one group and not the other, being rejected by both, or finding marginal acceptance from both. Even our formed identities can evolve and change, which can increasingly be in flux with modernization.

As I summarized the important points of bicultural identity at IHOP at 3 a.m., a number of people at the table nodded thoughtfully, and some started talking about their journey to self-exploration through cultures. It became an interesting and insightful discussion, minus the man for whom I was not Pakistani enough, who left without saying goodbye.

Muslim American communities are comprised of multiple cultures, languages and ways of living. It can be hard to coordinate and function as a larger community when, in fact, it is many communities, such as Arab, Persian, Turkish, Malaysian, Nigerian, Somalian and others. There can be language barriers, political issues and cultural differences. Some Indians and Pakistanis have beef (no pun intended) about the partition that happened 70 years ago. Many brought their animosity over oceans, only to divide their communities, affecting their social and political lives in the U.S. In fact, we are both South Asian. The prejudice is counterproductive.

In times as dire as now, when there is shameless targeting and discrimination against immigrants, people of color and Muslims, the last thing we need is prejudice and discrimination among ourselves. How “American” someone is should not be a measure of their worth. There are plenty of American-born Muslims of various cultural backgrounds who are devout and hardworking people. There are many who study and convert to Islam on their own, then have to face prejudice when trying to be accepted into Muslim social circles. It is God’s place to judge our character, not anyone else’s.

As far as social groups are concerned, we need to get organized as a community to stand up to the blatant and illegal actions taken against us by members of our society and government. If you are paying attention to the news at all, you see daily headlines of hate crimes, including harassment, assault and murder. The latest headline was the deaths of John Best and Taliesin Myrddin Namkai-Meche, two men stabbed when trying to protect Muslim women who were being harassed on a train in Portland, Oregon. There have been crimes committed against those who are not Muslim, but were mistaken as such, like the murder of Srinivas Kuchibhotla in Olathe, Kansas. There is the Muslim travel ban, mass misinformation, Arizona and Oklahoma denying the right to peacefully gather and other basic constitutional rights being denied. 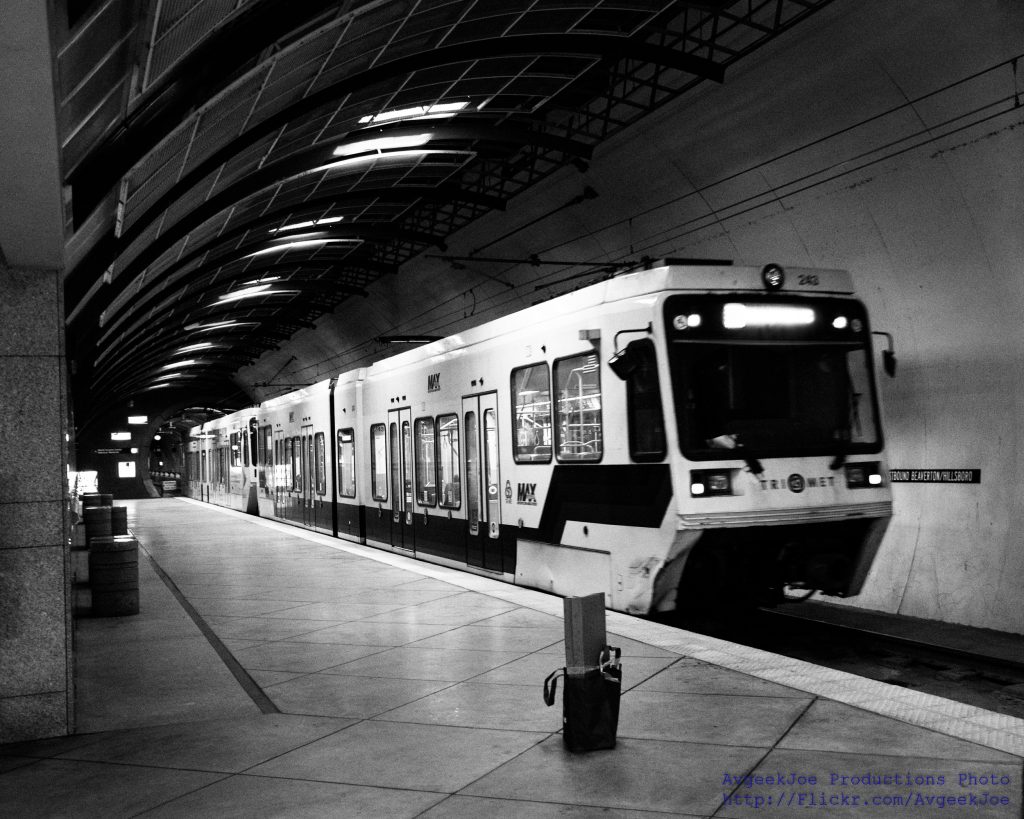 A Trimet MAX Train in Portland, where the confrontation that led to the stabbing occurred. > Flickr/Joe A. Kunzler

Islamophobia is on the rise, worse than ever, so it is important to come together and take a collective stand. I was thrilled to see Muslim women take the stage at the Women’s March on January 21 in Sacramento, California and Washington, D.C. I breathe a sigh of relief when panels of commentators on news networks feature an actual Muslim so we may speak for ourselves instead of having some ignoramus spout stereotypes. I am especially happy when I enter a mosque and see not just one color or cultural group, but several.

One of the U.S.’ founding fathers, John Dickinson, coined the term: “United we stand, divided we fall.” It was part of the “Liberty Song” first published in 1768. This could not be truer than it is today. Muslims, immigrant groups, women and various people of color are all minorities. If we are to stand up for our collective rights, end prejudices and misconceptions about who we are, demand to be treated fairly and be seen as fellow Americans, we have to stand together! If not, we will be treated as unwanted minorities, continue to face prejudice and discrimination, and have less power to fight back.

I am doing my part to create that community, and I would like to see others do the same. This Ramadan, share a meal with Muslims from a different background than your own, hear their stories, understand their struggles and try to feel their spirit. Go to a mosque that is new for you, sit with people you have not spoken to before. It says in the Holy Quran, “Oh Humankind, indeed, We have created you from a male and a female and made you nations and tribes that you may know one another.” (49:13) Our differences are what make us unique, and should not be reasons to divide and disempower us.

We are all human, we are all Americans and we all deserve the same rights as any other American. As Muslim Americans, we need to understand, care for and look out for each other. Everyone who has ever come to this country has done so with dreams of a better life. We must work together to achieve this for our communities. While breaking our fasts, we need to think of breaking the invisible barriers that divide us. United we stand, divided we fall. Say “Bismillah” and show some love to your fellow Muslim Americans.

*Image: A screenshot from the “Somewhere in America” Mipsterz video. Vimeo/HabibYazdi. 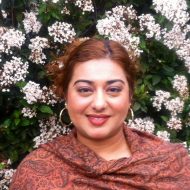 Sarah Astarte grew up in Sacramento, California to South Asian parents, and grew up in a multicultural atmosphere. She attended the University of California, Santa Cruz, where she received her B.A. in psychology with a minor in communications. She has a Ph.D. in transpersonal psychology, and an M.A. in psychology, from the Institute of Transpersonal Psychology in Palo Alto, California. She completed a chaplaincy residency at Stanford Hospital, and is an interfaith minister and chaplain. She has also worked as a hospice chaplain in the East Bay, California. She is a professor of psychology at Contra Costa College, and Diablo Valley College, is a diversity trainer, and facilitates events, rituals and conference presentations in Northern California. Sarah has studied numerous spiritual traditions, has counseled people of many different backgrounds, identifies as bicultural and is fluent in Urdu/Hindi and English. She lives in Sacramento, CA, with her husband, and her cats. She is an avid reader, and enjoys fire dancing, cooking, and being outdoors. Her work centers around helping her students and clients heal and transform into their most empowered selves.