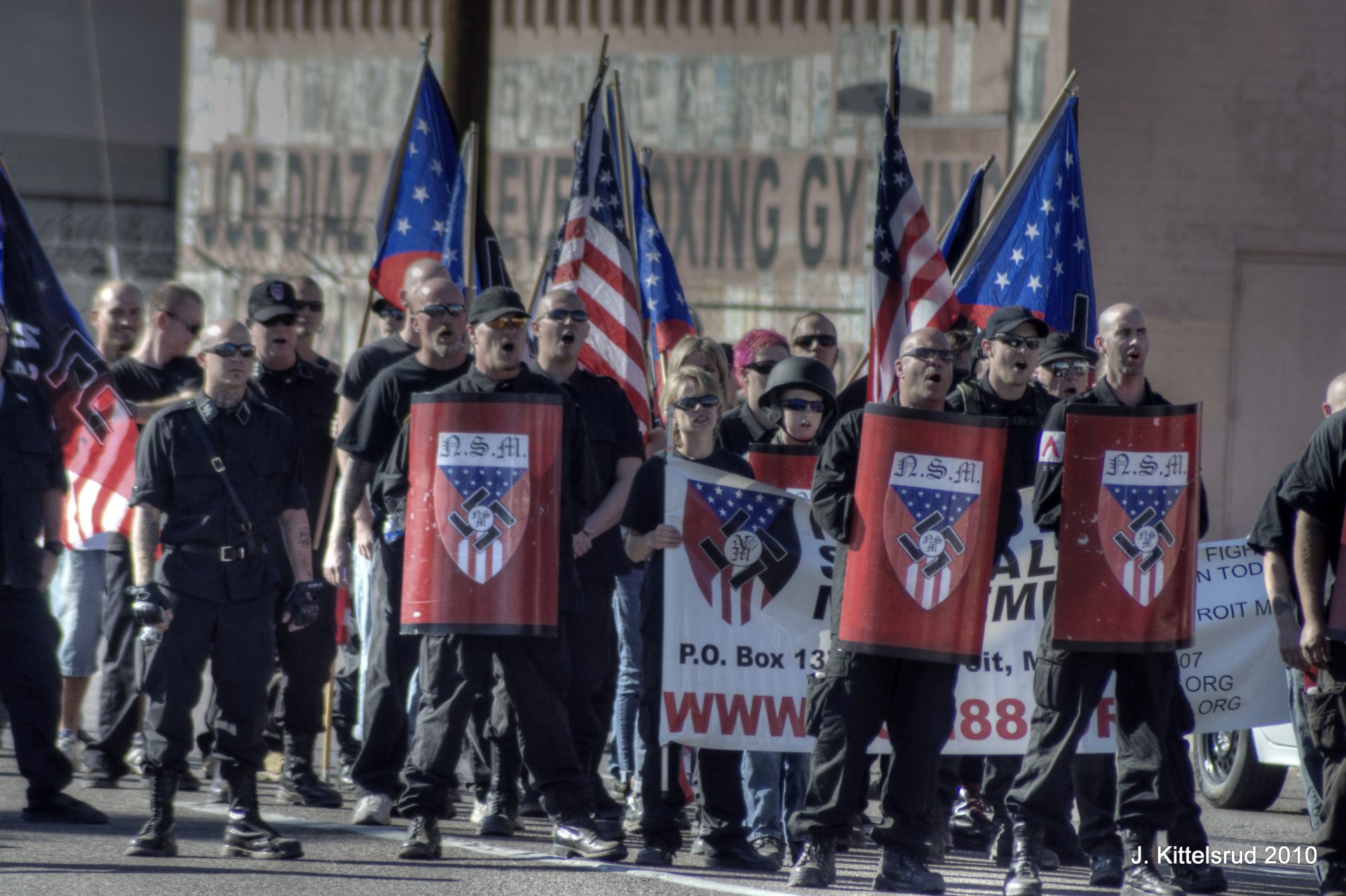 Why Don’t We Care About Right-Wing Terrorists?

Most observers and analysts today are happy to emphasize the role of “ideology” in the still-not-so-well-understood process of “radicalization.” This is especially true for Muslim extremism, which has long dominated the headlines as far as national security and counter-terrorism goes. Those who carry and spread the spores of violent ideologies — the ideologues, in other words — are thus seen as complicit in the act of terrorist violence itself, since they planted the seed. Or so the argument goes.

But the truth on the ground has proven to be much more complicated. People “radicalize” in dozens upon dozens of different ways, and the role of ideology is not completely well-understood amid this all. Moreover, even though it’s claimed far too many lives, incidents of Muslim terrorism — the supposed scourge of our present-day world — are actually much fewer in number than those of far right terrorism, at least in post-9/11 America. So if we accept the role ideology and ideologues play in terrorism perpetrated by Muslims, then what of those individuals on the right who are happy to traffic loudly in the rhetoric and ideas connected with right-wing extremism? Why aren’t they subject to the same ridicule and marginalization?

The answer isn’t so complicated. What protects these individuals from equal social and public scorn, particularly in discussions around national security and counter-terrorism, is, for the most part, their lack of Muslim-ness. They usually don’t have giant beards, for instance, and they don’t wear traditional clothing associated with the Muslim world. Their public image is thus much less, well, “foreign.”

These days, right-wing ideologues — far from being confined to their basement meet-ups and American History X­-ish interactions — can be found in the most prominent areas of society. One can start with the Republican Party, for instance. Or in particular areas of the mass media, mainstream or otherwise. Not only are these ideologues not told by those in power to tone it down, step aside or sent to jail for inciting violence, they’re sometimes even encouraged to dial up the volume, and are often given prominent platforms to spread their opinions and ideas.

The West’s public gatekeepers are very happy to ridicule or demonize imams who spend too much time spreading opinions on matters they have minimal understanding of or involvement in, but right-wing ideologies are apparently much more tolerable and legitimate. In fact, far right opinions and ideologues are often defended, at universities and other public arenas, on a free speech basis; they are supposedly adding to the diversity and marketplace of ideas. 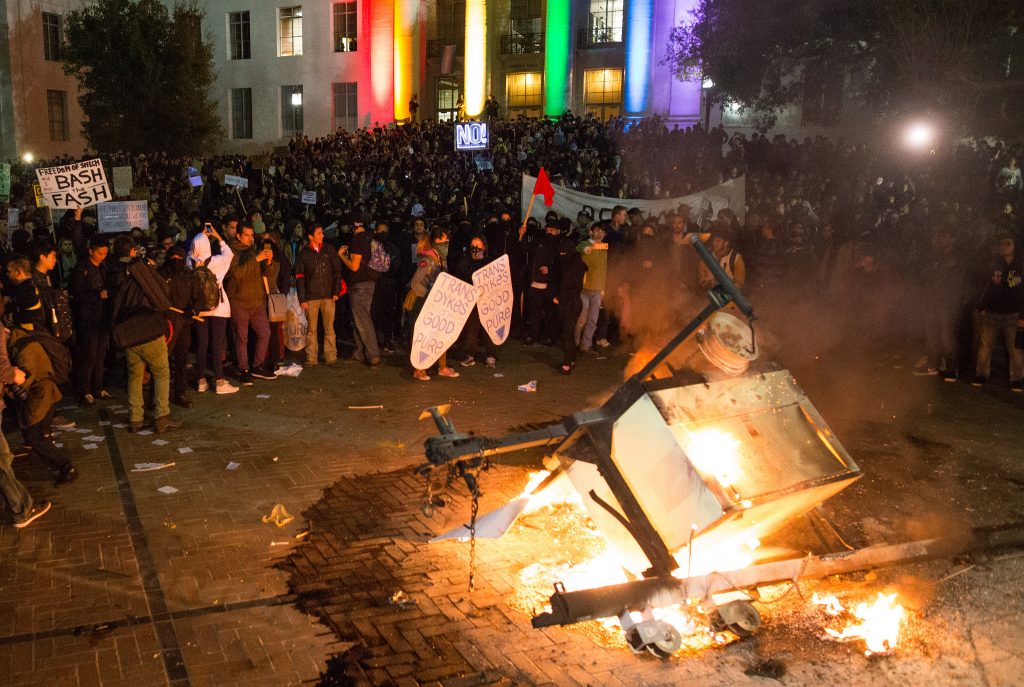 A protest against Milo Yiannopoulos’ planned speech at the University of California at Berkeley. > Flickr/JoeParks

The Western world is mired by both Muslim and far-right extremism. The latter is arguably worse as a systemic threat, but there’s no Muslim equivalent to far-right groups in the media or electoral politics. Meanwhile, a plethora of far-right parties can be found throughout Europe. The mass media, from US talk radio to outlets in Quebec, is teeming with, and benefiting from, right-wing demagoguery. Yet there’s virtually no talk of some sort of functional Countering Violent Extremism program to counter-radicalize these people and the processes they enable.

In other words, if we accept that Muslim extremist ideologies contribute to radicalization and must be countered and marginalized, then we clearly have a double-standard problem. Because no credible discussion or debate can be had today on the question of violent extremism or political violence without the mention of far-right extremism as a foremost example. It’s simply too significant a threat. It also has a very deep-rooted history in the U.S. and the West. Unlike Muslim extremism, it doesn’t have the same “foreign” public image. It’s more “homegrown” than anything else.

And yet, and yet, we know that to question or marginalize these entrenched voices would be to change the very parameters of debate in the West — parameters that are built to accommodate or even promote some forms of right-wing thought. Now, there’s clearly no reason to have to include or entertain the Nazi or KKK perspective, but a pretty extensive spectrum of adjacent ideologies are included and tolerated. The same kind of tolerance should be extended to Muslims who may have ill-advised and stupid things to say or promote, but shouldn’t necessarily be legally reprimanded for it.

Those who incite specific acts of violence should deliberately be shut down, if not thrown in jail, but anything short of that — whether spewed by far-right wingers or unhinged imams — probably falls under the veil of tolerance. Yet so far, a disproportionate amount of attention and space has been given to those on the right who encourage and augment the ideological and political climate that engendered more extreme forms of political expression.

In our post-9/11 holy war against political violence and extremism, an honest and self-critical societal gaze must re-examine and help to correct the reality of today’s sad double standards regarding dangerous ideologies and their promoters.