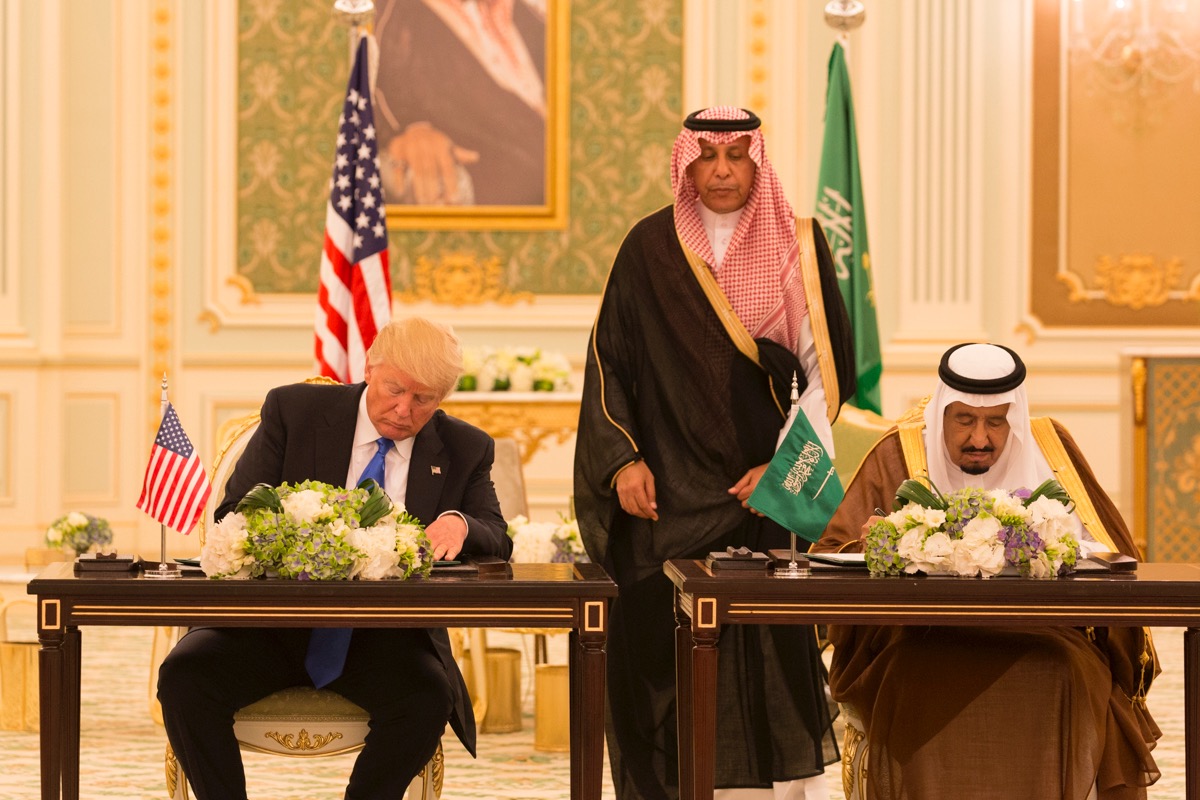 In recent years, President Donald Trump has questioned the legitimacy of Islam as a world religion. His body of work in this regard is impressive. He posed the deliberately ambiguous question, “Why does Islam hate us?”, proposed the creation of a registry for Muslims in the U.S., issued a travel ban on seven Muslim-majority countries for those returning  home, and framed the malignancy of “radical Islamic terrorism” as a hallmark of 1.5 billion Muslims worldwide. One would expect at least some pushback from the 55 Muslim leaders invited to the so-called Arab-Islamic American Summit in Saudi Arabia. Instead we witnessed a charade — the coronation of a triumphant Trump proclaiming, “veni, vidi, vici.”

It was a public humiliation for Muslims that none of the obsequious delegates from Muslim vassal states dared remind Trump about how his pejorative remarks about Islam, not just ISIS, have generated such global hysterical angst about Islam and Muslims. ISIS has been vehemently condemned universally by Muslims. Mainstream Muslims have made a repeated plea not to be broad-brushed with the diabolical terrorists. Muslims have also desperately engaged to extirpate this heresy from their religion. Yet through it all, Muslims have failed to remind the “current world order” that while an aggressive military approach demanded an immediacy of action, a multifaceted strategy based on social, educational, political, economic and above all a religious reform with the universal message of Islam is the key to expunging the heresy of ISIS and others of its ilk from Islam. For practicing Muslims, these goals are their imperatives to reclaim Islam. If implementation of these goals requires the assistance of like-minded law-abiding citizens of the world, so be it. It has to be the world against ISIS. Nothing short of that would work.

What followed during Trump’s participation at the summit was nothing short of monumental hubris from the apparent savior of the Muslim world (from itself). In one breath, he both identified ISIS as an existential threat to civilizational equanimity that had to be eradicated as an imperative by Muslims, as well as Iran as the greatest threat to regional stability as an agent of terrorism.  “Until the Iranian regime is willing to be a partner for peace, all nations of conscience must work together to isolate it.” This was uttered the same day that ISIS conducted yet another of its diabolical assaults in Manchester, England. Such a statement exposes how out of touch with reality “the leader of the free world” is. Either that or he is playing to the tune of the fiefdoms of the Gulf, or perhaps he is really instigating a full-blown war between Shia and Sunni Muslims, consistent with his expressed belief that “Islam hates us.” It is unlikely that it is unbeknownst to President Trump that ISIS is an avowed enemy of Shias, and that Iran has an unmitigated interest, as does the rest of the civilized world, in ISIS’ total annihilation. Thus, as Muslims fully support Trump’s resolve to eradicate the presence and ideology of the cesspool of terror, ISIS, by every means possible, they also reject his polemicist view that “Islam hates us.”

With Muslim countries exterminating one another and the U.S. profiteering from permanent wars (in other countries’ backyards, with blow back always lurking in the wings), it is not surprising to read the headline, ”Trump: Israelis and Arabs share ‘common cause’ against Iran.” This may help to placate Israelis and bring some measure of “peace” between Arabs and Israelis for a time, but at what cost to the stability and welfare of the entire Middle East? There is also the rising tide of random acts of terrorism elsewhere by those who would have lost everything and have nothing more to lose.

Despite Trump’s confrontational rhetoric, Iranian President Hassan Rouhani’s response was the hope that once the Trump administration had “settled down,” it would try to understand Iran better.

If Trump does view Iran as a powerful ally in the showdown with heretical cults such as ISIS and can form an allegiance with Russia, Turkey, Saudi Arabia and Iran, he will be more likely to broker a peace deal with Israel and Palestine and pulverize ISIS. This would not be possible if he cavorts with contemptible nations that command nothing but visceral loathing by their adversaries who include ISIS, their arms suppliers in the West, their Shia counterparts and the overwhelming majority of peaceful Muslims living under their oppression. The alternative to this bold alliance and comprehensive strategy is an endless war initiated, sanctioned and bankrolled by the U.S. This will not make America great again, but it will make the entire world a lot less safe.

Dr. Abdul Cader Asmal, MD, PhD, is the former president of the Islamic Center of Boston and the Islamic Council of New England, and director of the Cooperative Metropolitan Ministries.

Craig Considine is a faculty member of the Department of Sociology at Rice University in Houston, and is author of the forthcoming books, Islam, Race and Pluralism in the Pakistani Diaspora (Routledge, July 2017), Between Muhammad and Jesus: A Catholic’s Love of Islam.