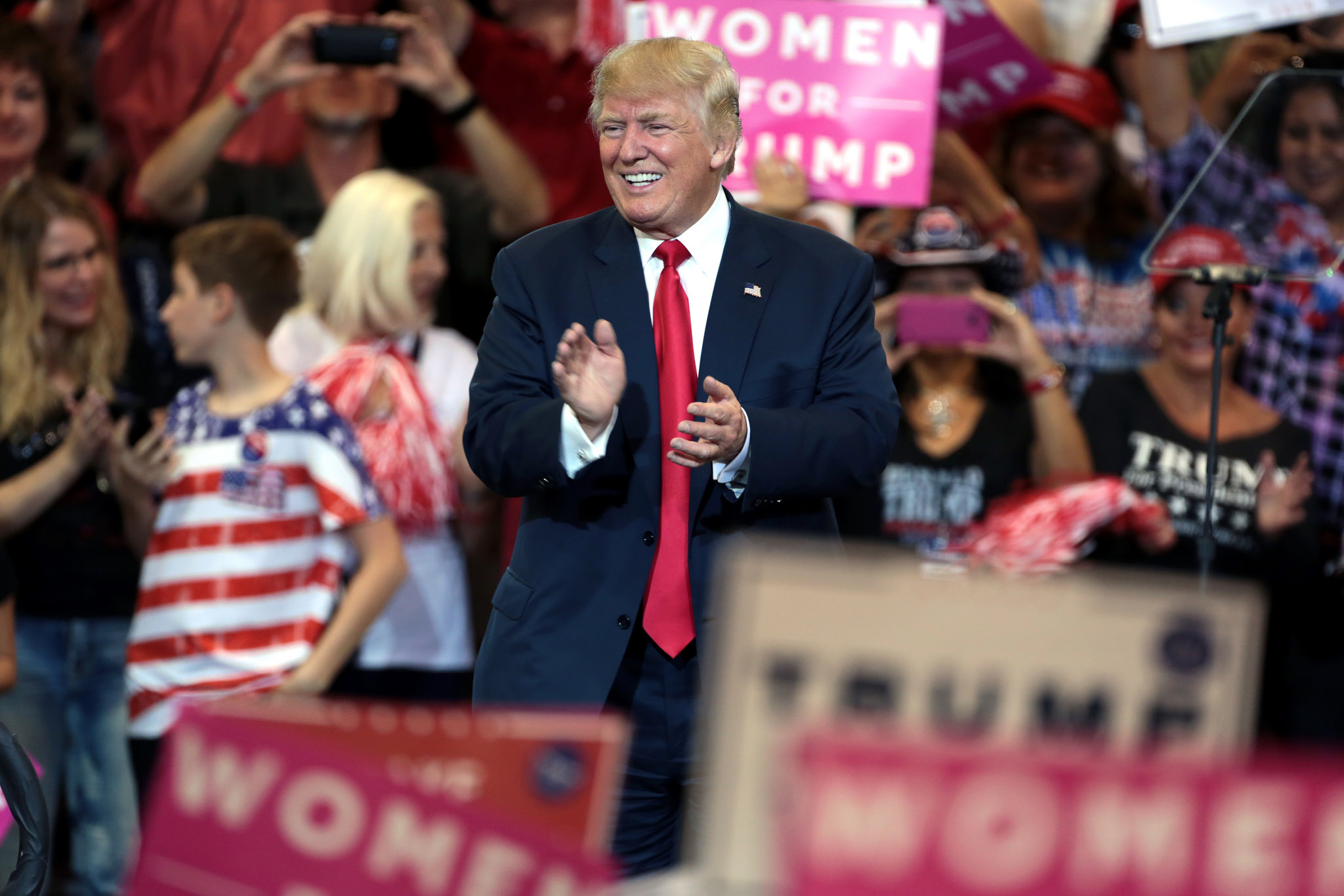 It’s hard to believe that Donald Trump has officially been president of the United States for only a week. (One down, 207 to go!) From Press Secretary Sean Spicer’s incredulous first performance to Counselor and PR guru Kellyanne Conway dry-heaving out the Orwellian-esque phrase “alternative facts” to describe Spicer’s blatant lies, the new Trump administration hit the ground running. As did his detractors. Less than 24 hours after Trump’s tombstone-and-carnage inauguration address, over 1 million people joined the Women’s March nationally, with thousands more across the globe — even in Antarctica — peacefully assembling in protest.

1) Crowd Size: Trump believes his inauguration turnout was the largest in history.

“[I]t looked like a million, million and a half people,” Trump claimed in reference to his inauguration crowd during a speech at the CIA. Then, in an interview with David Muir, Trump specifically drew Muir’s attention to a framed photo of the inauguration, using it as his evidence that the crowd was larger than reported. “Look. Look how far this is. This goes all the way down here. All the way down. Nobody sees that. You don’t see that in the pictures. But when you look at this tremendous sea of love — I call it a sea of love,” Trump said. Well, his “sea of love” was closer to a pool of “meh,” as the actual facts show a different story. 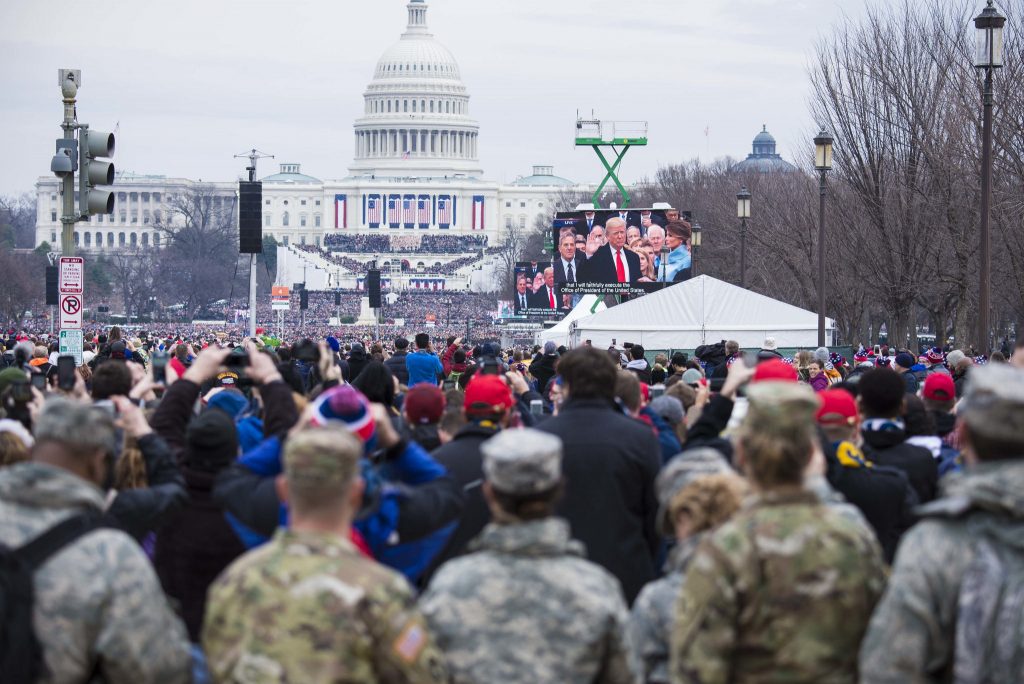 Despite two photos taken from the top of the Washington Monument showing a large visual difference in turnout from President Barack Obama’s 2009 inauguration to Trump’s 2017 event, and D.C. Metro public transportation ridership numbers (showing slightly more than 570,000 riders on the day of Trump’s inauguration, compared with 1.1 million for Obama’s), Sean Spicer still stormed into the press room and onto the world stage to convince us — and himself — otherwise. “No one had numbers,” Spicer first said. He then stated, “This was the largest audience to ever witness an inauguration, period.”

2) Voter Fraud: Trump believes there were between 3 million to 5 million illegal votes cast in the 2016 presidential election.

Winning the electoral college wasn’t enough for Trump; he needed to win bigly. That’s why he couldn’t let the fact that Hillary Clinton won the popular vote by nearly 2.9 million more ballots get in his way. So he developed the alternative fact that Clinton’s success was due to voter fraud. He first alleged the baseless accusation of rigged elections while campaigning. After winning the election, Trump tweeted: “In addition to winning the Electoral College in a landslide, I won the popular vote if you deduct the millions of people who voted illegally.” He then repeated the lie in a meeting with congressional leaders at the White House. When David Muir asked about the claim, Trump doubled-down, insisting on an investigation to identify the “…people that are registered who are dead, who are illegals, who are in two states. You have people registered in two states. … There are millions of votes, in my opinion.” Without an investigation having begun, he further claims with blind confidence that “…none of [the illegal votes] come to me. … They would all be for the other side.”

Trump has no idea if there were any illegal votes and cannot know if any of these “ghost votes” went for him or his opposition. Furthermore, his concern of voters being registered in two states — which is NOT illegal — should be aimed at his inner circle: Steve Bannon, Sean Spicer, Steven Mnuchin, Jared Kushner and Tiffany Trump are registered to vote in two states. And dead people listed on voter rolls is not the same thing as dead people voting. People die between the time they register to vote and when an election occurs. This is not a sign of fraud. It’s just a sign of Trump’s ghost facts.

Trump’s “2016 federal disclosure forms show he owned between $15,000 and $50,000” in ETP stocks, less than “between $500,000 and $1 million a year earlier. Trump also owns between $100,000 and $250,000 in Phillips 66, which has a one-quarter share of Dakota Access.” Without Trump releasing his taxes and truly divesting from his various business interests — the subject of a lawsuit filed January 23 by a group of constitutional lawyers and scholars charging that Trump is in direct violation of the Foreign Emoluments Clause — we’ll never fully know which decisions serve Trump’s interest, instead of the nation’s. Because right now, Trump’s financial integrity is as non-existent as the federal taxes he pays.

4) The Border Wall Below: Trump believes that a physical wall along the almost 2,000-mile-long border between Mexico and the United States is needed “to prevent illegal immigration, drug and human trafficking, and acts of terrorism.” And that Mexico should pay for it.

Illegal immigration is difficult to discuss because multiple issues get conflated and quantifiable metrics are hard to find. But if you look at available data and compare them with Trump’s reasons for building the wall, the flaws in his executive order grow more apparent. First, not a single act of terrorism (as currently defined in this modern political climate as acts carried out by radical Muslim terrorists) in the United States has been connected to an unauthorized immigrant crossing our southern border. Some people have been stopped at the border with alleged ties to terrorist organizations, but this just proves the current system is working without a wall.

Secondly, the problem of trafficking is a mix of variables, including violent drug cartels battling to meet the demands of Americans who want to get high, lack of options for Mexicans and Central Americans simply looking for better economic opportunities, and the exploitation of innocent women and children sold and forced into sexual slavery, servitude, and drug muling. Add in the various underground tunnels along the border and the fact that the Sinaloa cartel has a larger fleet of airplanes than Mexico’s largest airline, it’s clear that a wall will not stop cartels from providing drugs to Americans. 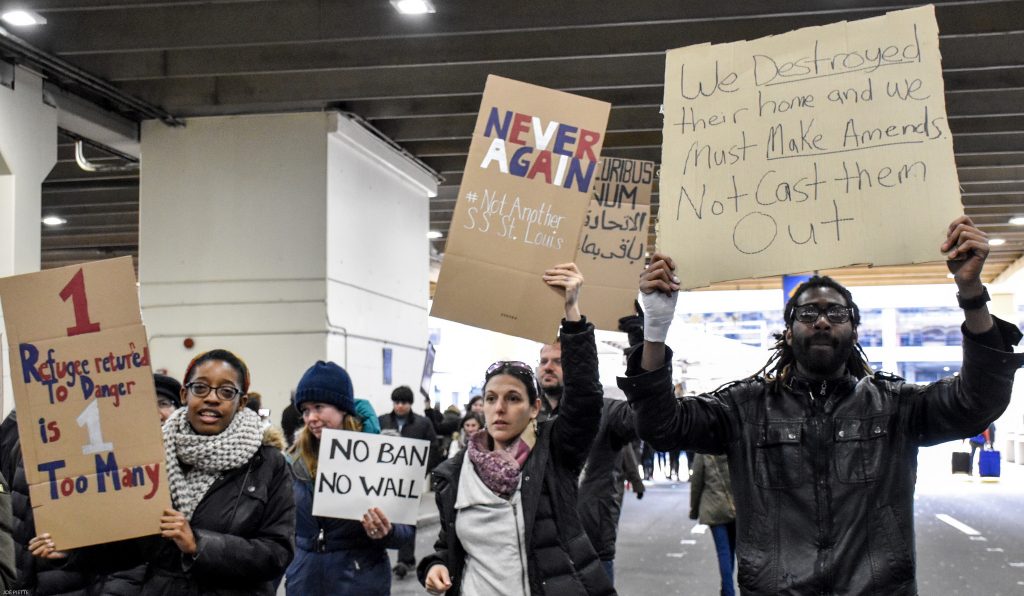 A protest against Trump’s wall proposal at the Philadelphia airport. >FLICKR/Joe Plette

Worse yet, Trump insists that Mexico will pay for the border wall. Estimates reach up to $25 billion and that doesn’t include maintenance and manning the wall. After Mexican President Enrique Pena Nieto canceled a meeting with Trump in response to the executive order, Trump changed the payment terms by claiming that the U.S. will “be reimbursed at a later date from whatever transaction we make from Mexico,” and then more ambiguously adjusted his accounting by stating, “I’m just telling you there will be a payment. It will be in a form, perhaps a complicated form.” Trump has pivoted once again by now claiming that the cost could be covered by a 20% tariff on all Mexican imports, meaning that the wall once supposedly to be paid for by Mexico would now be paid for by American consumers.

5) The Muslim Ban: Trump believes that “to protect the American people from terrorist attacks,” he must prevent citizens of Muslim countries from entering the United States and that his executive order does not amount to a religious ban.

In his most inflammatory act of the week, Trump suspended visas and other immigration benefits to nationals from seven Muslim countries (Iran, Iraq, Syria, Sudan, Libya, Yemen and Somalia) totaling a population of 218 million people. Trump further disparaged the Syrian humanitarian crisis by proclaiming “the entry of nationals of Syria as refugees is detrimental to the interests of the United States.”

In 24 hours, the ban turned away a Syrian family at the airport after they spent the past 15 years following the immigration process; an Iranian researcher with a valid visa who was awarded a prestigious fellowship at Harvard’s Brigham and Women’s Hospital in Boston; two Iraqi men, one of whom worked on behalf of the U.S. government in Iraq, and around 100 other travelers who were unfortunate enough to have been mid-air when Trump issued his decree. The ACLU, representing the two Iraqi men, filed a lawsuit accusing Trump’s order of violating the constitutional rights of due process and equal protection. Although U.S. Judge Ann M. Donnelly blocked part of the executive order that sought to turn away travelers who’d arrived at U.S. airports after the issuing of the order, the ruling does not stop the order from preventing future travelers from entering the U.S. 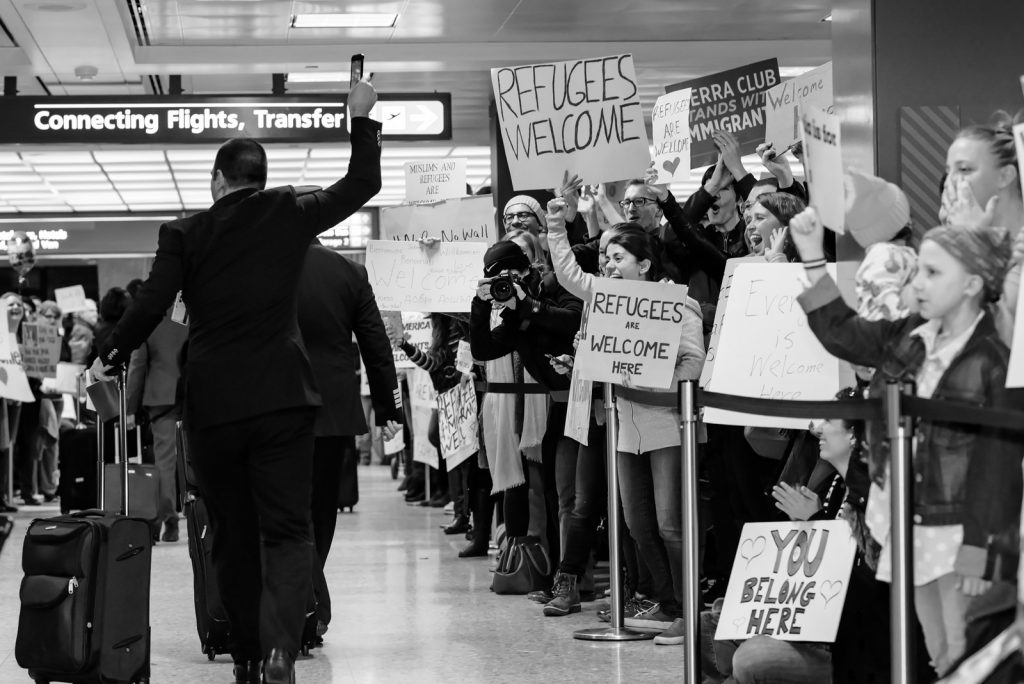 A protest at the Dulles International Airport. >FLICKR/Geoff Livingston

Just when you think he couldn’t be more wrong, Trump’s decision targets seven countries that have not produced a single terrorism-related death in America. Oddly enough, countries that have actually produced terrorists that have attacked the U.S. — like Saudi Arabia, Lebanon, Egypt, and the U.A.E. — are not on the banned list. (Nor should citizens of those countries be banned from traveling to the U.S. either.)

Furthermore, Trump claims that his executive order banning travelers from seven Muslim countries is not a religious ban. Ignoring the fact that his ban is against seven predominantly Muslim countries, Trump told the Christian Broadcasting Network during an interview that he would prioritize Christian Syrian refugees over their Muslim countrymen.

All of this has been put forth by a man whose addiction to watching television news has so concerned his aides that they leaked their fears to the media, and has been described as a malignant narcissist and “dangerously mentally ill and temperamentally incapable of being president” by a psychotherapist at Johns Hopkins University. And remember, it’s only been one week!