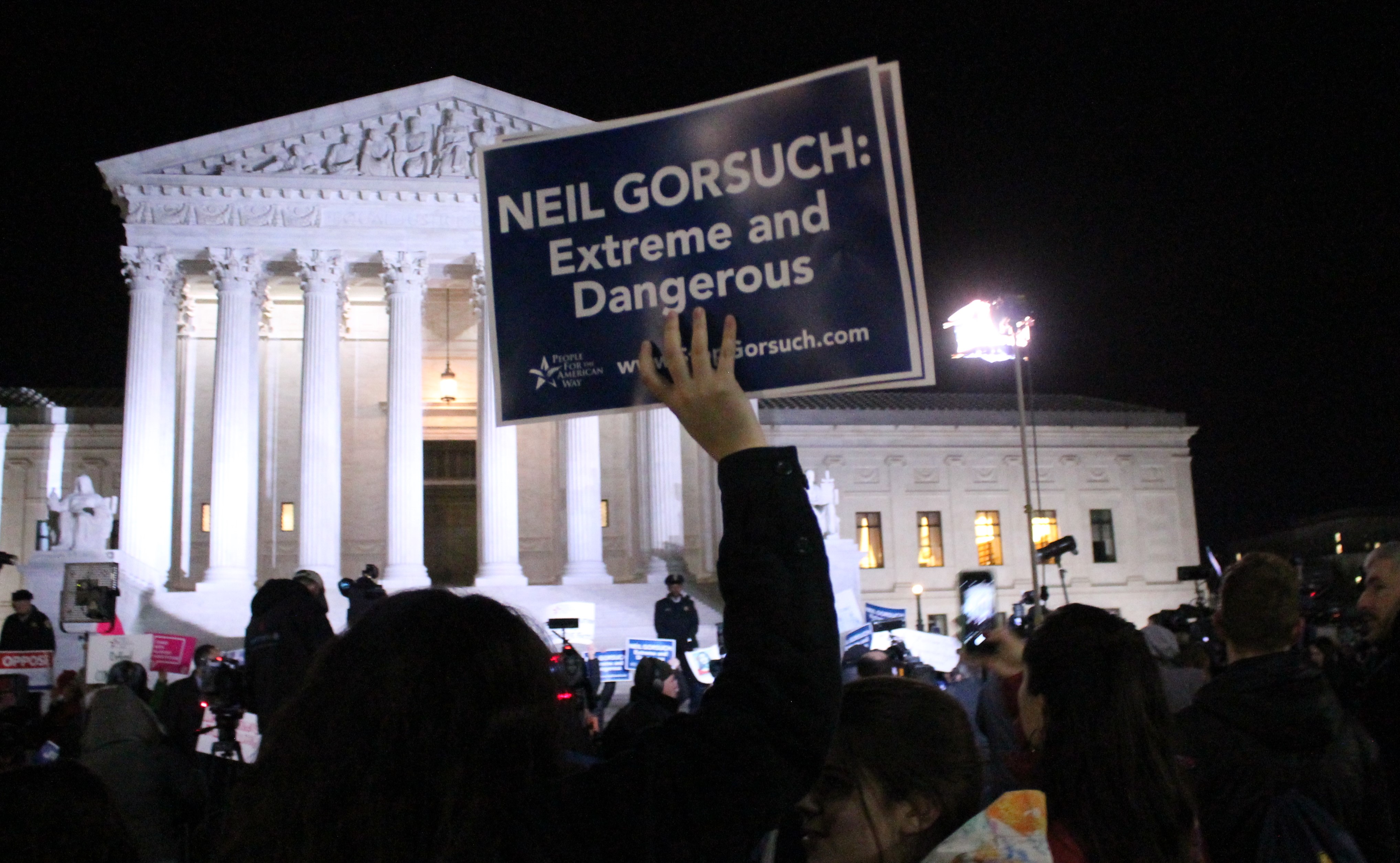 45 Watch: 3 Reasons to Say No to Neil Gorsuch

Two months ago, Donald Trump announced his pick for the vacant Supreme Court seat in true showman fashion. He forewarned America of his decision in an early morning tweet, moved the originally planned daytime announcement to a live evening broadcast for primetime TV ratings, and increased the suspense by inviting both his picks to be present for a selection showdown. Embarrassingly stumbling with his words, Trump finally selected Judge Neil Gorsuch. Tipping his hat to his reality TV marketing tactic, Trump even asked the crowd assembled before him: “So was that a surprise? Was it?”

The only surprise was that Trump selected a well-qualified contender. Gorsuch has an impeccable educational pedigree (B.A. from Columbia, J.D. from Harvard, and a Ph.D. from Oxford), has clerked for two Supreme Court justices (Byron White and Anthony Kennedy), and looks every bit the part of the right pick. But his “golly-gee-goodness” shtick — an act so folksy even Andy Griffith would roll his eyes — belies a murkier side that’s gone unquestioned by the numerous Republican senators fawning over his good ol’ days act and gone unanswered by Democrats who’ve asked pressing questions. Since he could spend at least 35 years on the highest court of the land, let’s take a closer look at three reasons why he shouldn’t be confirmed.

Support of Torture, Praise for Guantanamo

It is indisputable that the U.S. tortured innocent men and “enemy combatants“ in various CIA black sites and military prisons throughout the world. It is also undeniable that torture is universally condemned under international law and that the U.S. has been in direct violation of the Convention Against Torture. And just like the U.S., when it comes to torture, Gorsuch has repeatedly been found on the wrong side of history and justice. From 2005 to 2006, Gorsuch served as principal deputy to the associate attorney general (OASG) in the Department of Justice (DOJ), where he handled all the OASG terror litigation.

During this time, Gorsuch wrote in support of defending “enhanced interrogation techniques” — the Bush administration’s euphemism for torture — and noted on talking points for then-Attorney General Alberto Gonzalez that such “techniques” did provide valuable intelligence, without providing any evidence. (Gorsuch won’t be able to either. The Senate intelligence committee’s almost 7,000-page investigation into the CIA’s interrogation program, declared, as its number one finding, that “enhanced interrogation techniques [were] not an effective means of acquiring intelligence or gaining cooperation from detainees.”) When pressed by Senator Dianne Feinstein (D-California) on the second day of his Senate confirmation hearing about his support of the more nefarious elements of the Bush administration, Gorsuch responded that he was merely a lawyer or speechwriter finding himself in a “tug of war,” an attempt to absolve himself of any responsibility. 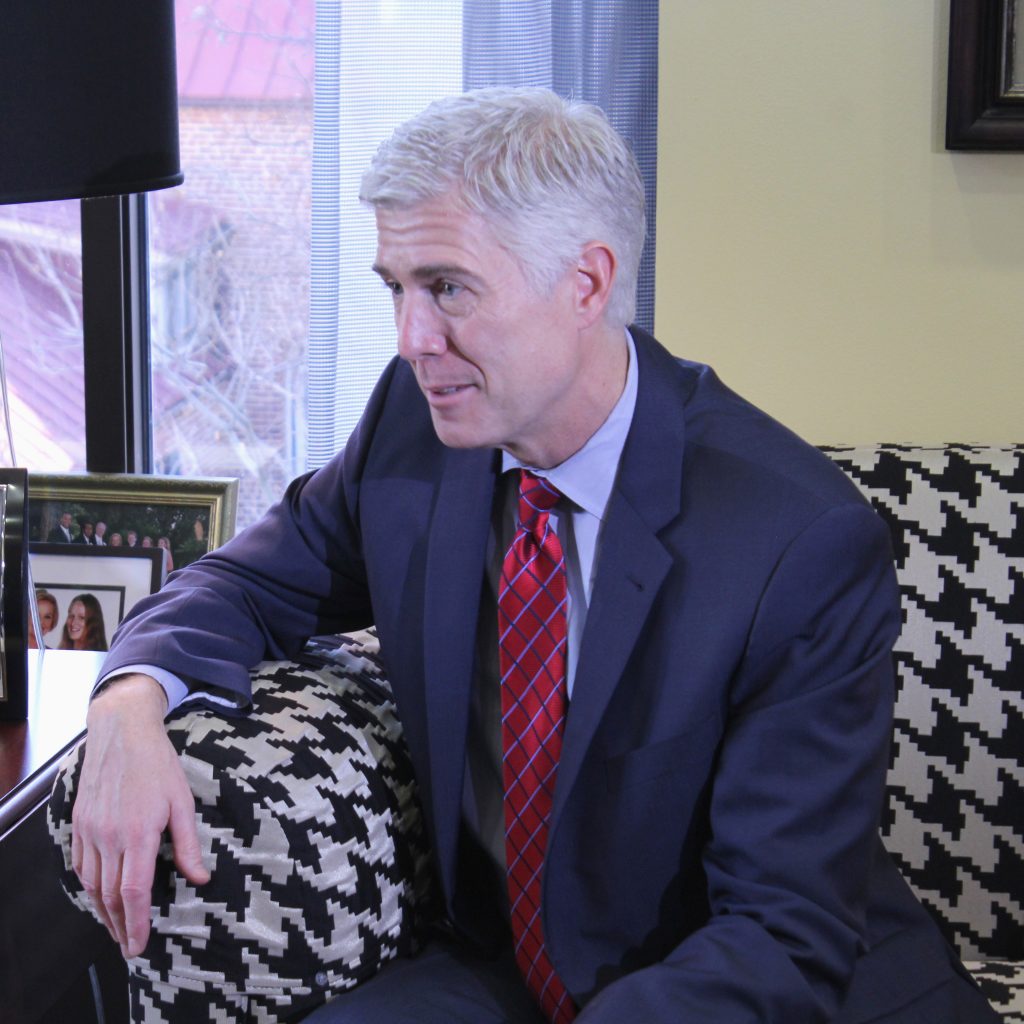 Additionally, Gorsuch reviewed and developed case strategy defending the U.S. in landmark decisions, Hamdan v. Rumsfeld and Boumediene v. Bush. The Supreme Court ruled against the Bush administration in both cases, finding the government in violation of the Geneva Convention in the former and in violation of the Constitution by denying prisoners the right to challenge their detention in the latter. (Five other cases during his time at the DOJ supported unrestrained executive authority in regard to national security.)

As he attempted to strike down the rights of prisoners at Guantanamo, he expressed his distaste for law firms providing pro bono counsel to Guantanamo detainees, and heaped praise on the prison. “I was extraordinarily impressed,” Gorsuch gushed in a letter to then Brigadier General Jay W. Hood, the commander of Joint Task Force Guantanamo. “You and your colleagues have developed standards and imposed a degree of professionalism that the nation can be proud of.”

Apparently, Gorsuch wells with pride at the thought of mental deterioration, torture and dehumanization of innocent men, alleged murder of detainees, inmate suicide, rectal rehydration, gruesome forced feedings and a price tag of more than $7 million a year to imprison each inmate.

Propped Up by “Dark” Money

The Judicial Crisis Network (JCN) has put up a $10 million campaign to support Gorsuch’s ascension to the Supreme Court. Such funding is referred to as “dark” money because it represents, according to Jane Mayer, the author of Dark Money, “the growing amount of untraceable cash into politics from undisclosed sources.” The JCN has ties to the Koch brothers and right-wing organizations, like the Federalist Society. However, because the JCN doesn’t reveal where its money comes from, donor transparency becomes a game of connect-the-dots. One of the larger dots of concern is billionaire Philip Anschutz.

Gorsuch worked as Anschutz’s lawyer while at a private firm in Washington, D.C., prior to joining the Bush administration in 2005. Anschutz, in turn, lobbied for Gorsuch, a fellow Colorado native, to be appointed to the U.S. Court of Appeals for the 10th Circuit, which hears cases from Colorado and districts in five other neighboring states. Once confirmed to the court, Gorsuch became a regular speaker at Anschutz’s annual retreats and purchased a 40-acre property on the Colorado River with members of Anschutz’s business empire to build a vacation home.

When Senator Sheldon Whitehouse (D-Rhode Island) pushed Gorsuch to reveal who funds the group supporting his nomination campaign, Gorsuch avoided responding because he didn’t want “to get involved in politics.” Despite his apolitical claim, Gorsuch is supported by groups actively trying to bend the Trump judiciary to their political ideology — one Gorsuch has supported in numerous opinions as a judge and a student. Even more troublesome is that without knowing who has financial ties to Gorsuch, we’ll never know of possible conflicts of interests. Gorsuch has recused himself from cases tied to Anschutz on the 10th Circuit and claims his standard for recusal goes way beyond required law and ethical obligations. However, as journalist Charlie Savage points out, “the Supreme Court’s procedure is that individual justices decide for themselves whether a vague standard for recusal set by a 1974 statute is met; there is no appeal if they decide to stay on a case.”

While the public has no idea who is funneling money to support nominees for a lifelong Supreme Court position, those candidates “have a pretty good idea who their deep-pocketed supporters are,” says Dark Money author, Mayer. “So when a nominee for the high court is confirmed, he or she likely knows to whom the favors are owed. But the rest of the country is in the dark. It’s a recipe for corruption.”

Gorsuch loves to play semantics with the law. And just like his idol, the late Justice Antonin Scalia, Gorsuch is an originalist and a textualist — one who relies on a strict semantic interpretation of statutes, based on what is thought to be the original meaning. As Trump recently play-acted the role of a truck driver, Gorsuch played with words to deny rights for a truck driver in what is now known as the Frozen Trucker case.

On the night of January 14, 2009, Alphonse Maddin was driving a load of frozen meat through Illinois. Low on fuel, Maddin pulled over at 11 p.m. to identify the nearest company-approved fuel station. Ten minutes later, he attempted to pull back on to the highway, but found that the brakes on the trailer (not the truck) were frozen. Stranded in below-freezing temperature, Maddin called his company’s road service to report the issue and was told a repairman was being sent to his location. While waiting for service, Maddin realized there was no longer any heat in his truck cabin. He fell asleep and awoke two hours later unable to feel his torso and feet. Fearing hypothermia, Maddin called the service line again to report his broken heat, his physical condition and to inquire when help would arrive.

Maddin then called his supervisor, Larry Cluck, to report his worsening condition and that he needed to leave the trailer for safety. Cluck ordered Maddin to either drag the trailer with frozen brakes with him or to wait for the repairman. Maddin instead decided to unhitch his truck from the trailer and drive away. Fifteen minutes later, Maddin drove back to the trailer to meet with the repairman who had finally arrived. Once the repairs were completed, Maddin again called Cluck to ask where he could get fuel. Cluck told Maddin he was being written up for abandoning the trailer. Less than a week later, Maddin was fired.

Maddin filed a complaint with the Occupational Safety and Health Administration (OSHA) for wrongful termination. His employer, Maddin claimed, violated his right under the Surface Transportation Assistance Act (STAA), which prevents the firing of an employee who “refuses to operate a vehicle because … the employee has a reasonable apprehension of serious injury to the employee or the public.” 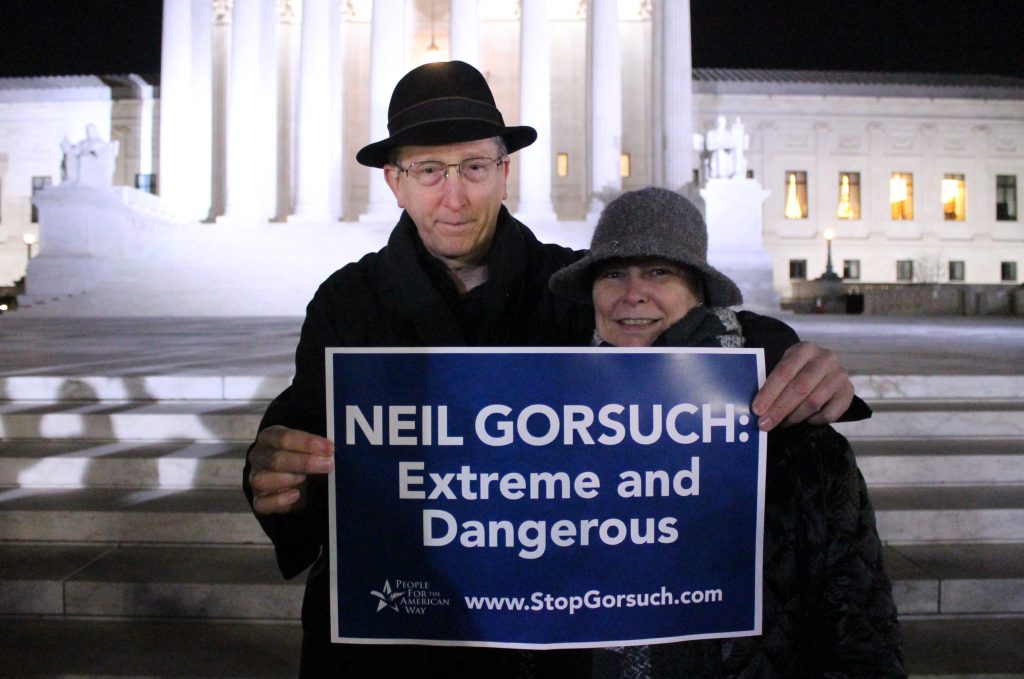 A protest against Neil Gorsuch in Washington > Flickr/Elvert Barnes

The case made it to the 10th Circuit Appeals Court, where the judges ruled 2-1 in Maddin’s favor. The lone dissent came from Gorsuch, who, using textualism, focused primarily on the STAA phrase “refuses to operate.” It didn’t matter that Maddin almost froze to death, that he reported his condition multiple times and waited over two hours for help, or that he returned to his trailer once it was fixed to resume his delivery. Gorsuch ruled against Maddin because by driving — or “operating” — his truck away from the trailer, Maddin didn’t meet the requirement of “refusal” to operate his vehicle. Thereby, Gorsuch argued, Maddin’s actions were not protected by the STAA and he had no claim to wrongful termination.

Gorsuch could have easily ruled in Maddin’s favor by defining the term “vehicle” in the STAA as both the trailer and the truck, therefore the act of Maddin unhitching the trailer would fit a strict definition of “refusal to operate.” But he didn’t. Instead Gorsuch’s dissent minimized the suffering of a human being and ruled in favor of a corporation, under the guise of textualism. (Such an approach is reminiscent of Scalia’s famous claim that torture doesn’t violate the Constitution’s 8th Amendment protection against “cruel and unusual punishment,” because, according to him, torture isn’t punishment.)

While a Gorsuch confirmation bodes well for those looking to replace Scalia with a like-minded judge, it doesn’t look promising for those seeking support for individuals’ rights against establishment powers. Now that Democrats in the Senate have enough votes to filibuster, let’s hope the judge with questionable judgement doesn’t make it to the Supreme Court.

*Image: A protest against Neil Gorsuch in Washington. Flickr/Elvert Barnes.