It’s that time of year again. This feeling of unease, which usually settles in around the middle of August, morphs into apprehension then dread as the 9/11 anniversary approaches. Each year seems to have a central theme — a flood of forgotten memories bubbling to the surface, new connections, revelatory insights. The close proximity to Hajj this year caused me to examine my personal journey as a firefighter and arson investigator in the New York City Fire Department (FDNY).

As I replay the numerous episodes of life and death drama sprinkled throughout my career, two experiences stand out that marked my first and last years. Aside from the symmetry of opening and closing my tenure, they are etched in my memory because they capture the fragility of life and the lasting consequences of the acts of a few on the many.

A knock on the door

It was 1982 and I was several months into my first year at Ladder Company 12 on 19th Street in Manhattan. As a probationary firefighter with less than one year on the job, I ritually checked out the truck and cleaned the tools after the morning roll call. This meant taking various tools of the trade to the slop sink at the back of the firehouse, scrubbing them with steel wool even if they didn’t need it, and applying a light coat of oil to prevent rust. There were the forcible entry tools of an ax and a Halligan bar, the latter an odd-shaped pry bar named after an FDNY chief in the 1940s. Then there were the long poled hooks used for pulling down ceilings to inspect for fire spread as well as for dropping the anachronistic fire escape ladders adorning the remaining tenement buildings at the advent of Chelsea’s building boom of high-rise luxury apartments.

I was checking the five-gallon fire extinguisher to make sure it was fully charged when the knock on the firehouse door came. I didn’t think anything of it until I heard a flurry of movement and my lieutenant telling the house watchmen to turn the truck out as he darted out the door. Thinking it was a fire, I followed him in hot pursuit lugging the fire extinguisher I had been assigned as the can man. As I ran down the street, I heard the overhead doors open as the truck edged out against traffic.

I looked for smoke but only saw a small crowd of people, soon joined by my lieutenant, on the far corner of 19th Street and Avenue of the Americas. As I approached, I saw that they were standing over a young man in traditional Hasidic garb, wedged between the curb and a parked car, who had just jumped from a 10th-floor window. Despite the pool of dark crimson blood spreading beneath the back of his head, his bewildered look revealed that he was still alive.

My lieutenant, a grizzled veteran of the Bronx and Brownsville firestorms of the 1970s, placed his fingers alongside the man’s neck. Subdued, he muttered softy to no one in particular that it was his goodbye pulse. Unable to move or speak, the man’s pale blue eyes seemed to lock onto mine until they glazed over like the eyes of an animal you had just put out of its misery.

The oppressive feeling of despair hung in the air like heat radiating from a hot summer sidewalk. An EMT crew bounded over but did a quick about-face when they grasped the gravity of the scene. The man’s co-workers came down in shock. Sure, he had been complaining about being unable to find a wife, but no one expected him to suddenly hurl himself through an open window for a permanent solution to the temporary angst most men his age invariably feel at one time or another.

His look haunted me. It suggested that he was conscious the entire time down, feeling terror at the imminent impact with the recognition that there was no turning back from his act as the ground rushed toward him. Or maybe he found the peace he was looking for; that’s something no one can ever know. As the French philosopher Maurice Merleau Ponty observed, the absence of reference points precludes anyone from experiencing their first or last thoughts as such.

My thoughts now turn to my last year on the job where the makeshift morgue at Ground Zero came into view. It was only a couple of days after the collapse of the World Trade Center, and I still felt the surreal, dreamlike quality it held for me, like something that wasn’t really happening. The tall shards of concrete that surrounded the smoldering pit of what had once been two buildings more than 100 stories high gave me a taste of what Hiroshima must have been like to survivors.

The insidious powdery dust was everywhere. Consisting of pulverized cement mixed with an untoward amount of finely ground glass and toxic chemicals from fluorescent fixtures, it was a task in itself to keep from lapsing into an uncontrolled cough. I caught up with a fellow supervisor who broke me in as a fire marshal at the gurney where newly recovered bodies were laid out for preliminary identifications and prepped for delivery to the morgue at Bellevue.

Although only a few days had elapsed, the difficulties in making identifications were compounded by the smoldering girders and concrete shards that had the effect of a slow cooker. More often than not, only body parts were brought in. Our job was to assist the medical examiner with identifying remains that may have been Fire Department personnel.

There was an aura of danse macabre as we carried on like it was just another day at the office despite the grim task at hand. The medical examiner was all business whenever bodies were carried in. His demeanor visibly changed as he donned his gloves and gingerly searched pockets and personal belongings with the utmost solemnity and respect befitting individuals who had only days before gone about the hustle and bustle of life.

One poor fellow had a long, full beard, so it was unlikely he worked for the Fire Department. He was discolored by the heat and almost didn’t look human. I tried to distinguish whether his beard was from religious affiliation or fashion, but I could not tell. I recalled imagining that he would gladly suffer the vicissitudes of life if only to feel the sun shine on his face once more.

I was emotionally spent as I returned to my vehicle at the end of the tour. I turned on the radio as a distraction, and settled on WNYC, which was playing large blocks of uninterrupted music. As I pulled out, Tobias Picker’s somber “Old and Lost Rivers” came on. After listening for about a minute, I pulled over to compose myself and digest the events of the last few days. 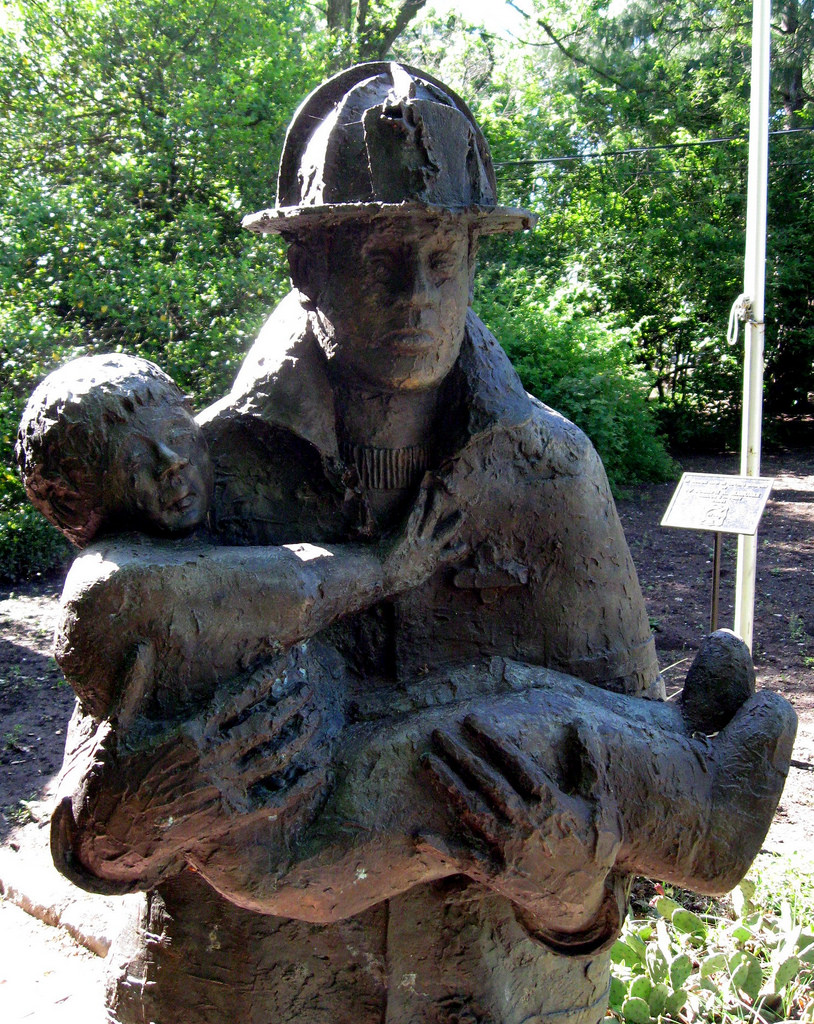 A memorial sculpture for firefighters killed on 9/11 > Flickr/John

The catch phrase “All gave some, some gave all” can’t do justice to the staggering losses suffered by the FDNY on 9/11. Of the 2,753 killed in New York City, 343 were firefighters, a fire marshal, two paramedics and one of the Department chaplains. In October 2017, the New York State Fallen Firefighters Memorial in Albany will add another 113 names of FDNY members who died in the line of duty from cancer and other illnesses directly attributable to the World Trade Center collapse.When you include emergency medical technicians, fire marshals and civilian personnel, the Fire Department has lost an additional 159 members since 9/11. The Department added 32 names to its bronze memorial wall recently, the largest single total since the wall was erected in 2011.

Just about anyone who operated at the scene for any length of time developed respiratory problems of one sort or another. Those who barely escaped the towers with their lives suffered survivor’s guilt as well as post-traumatic stress disorder from witnessing the brute force of the collapse and its aftermath. One of the fire marshals who helped me prepare a promotional exam several months later related how he was tormented by recurring nightmares of bodies falling from the sky.

At a personal level, the collapse of the towers flattened my worldview. True, I felt honored appearing as an FDNY emergency responder to illustrate that Muslims are an integral part of America and that the attack on 9/11 was an attack on us all.  But the platitude that Islam was a religion of peace increasingly rang hollow, which caused me to question my articles of faith. Columbia Law School’s culture of questioning norms and how they function to perpetuate social control for elites further accentuated my alienation from orthodoxy.

With the aid of thinkers such as Mahmoud Taha, Farid Esack and Fatema Mernissi, I began thinking outside the Kaaba. I increasingly saw Islam less as a religion or source of self-identity and more as a birthright, our innate cognitive faculty that perpetually seeks meaning throughout the arc of life. Over time I found myself unable to continue with an activism that circled the wagons around a moribund political Islam. Instead, I sought the Islam that begins and ends in the individual as an antidote to the mindless violence that masquerades as faith.

Yet I now feel a second wind coming, a need to get involved again, particularly in light of the marked increase in violence and hate crimes directed at anyone perceived as Muslim. How this takes shape remains to be seen, but it will definitely involve an open feedback loop of how we define Islam, Allah and the Quran. A critical inquiry that echoes the Quranic command to question what our forebears pass down as well as American agnostic Robert Ingersoll’s insight that when a fact can be demonstrated, force is unnecessary, but when it cannot be demonstrated, force is infamous.

A tangible groundlessness permeates me, one that alternates its gaze between the Be! and it is with the endless span of time when we are beings unremembered. Hajj itself has come to signify our never-ending pilgrimage to find meaning in the world, to seek knowledge from cradle to grave wherever it takes us. I know not where mine will lead, but today I will again grapple with the stark contrast between the sad eyes that faded into oblivion and the thousands of lives lost through no fault of their own.