Muslims, Syria and the Anti-Imperial Left

For many who’ve come of age in the post-9/11 world (of Iraq/Afghanistan, drones, blacksites, etc.), it’s become somewhat customary to perceive the United States as the world’s top purveyor of tragedy and mayhem. As the dominant post-war force, the U.S. has accumulated for itself a prolific and bloody record of unwise interventions, regime change, political assassination, ignominious complicity and blind neglect, etc. All this warrants a heavy dosage of adversarial skepticism when assessing American foreign policy today.

But the world is a big place with a lot of bad actors in it and, as bloody as the American record has been in the past century or so, no single state has a monopoly on evil and bloodshed.

Yet this seems to be the permanent worldview of a great portion of the left, including many Muslims, who’ve convinced themselves that as long as the U.S. exists, it shall remain the singular proponent of evil on earth and nothing else. This is particularly true when it comes to the indescribably bloody conflict in Syria, where hundreds of thousands of innocent civilians have died at the hands of Bashar Assad. As of now, the country essentially has no functioning state apparatus.

Iran and Russia’s aiding and abetting of Assad’s blood-reign for the past few years has elicited less public outrage and protest from much of the (Muslim) left than Donald Trump’s cruise missile attacks earlier this month, which damaged a portion of the Syrian Army’s air force.

When Russia swooped in to save Assad from a possible defeat in the fall of 2015, very few voices on the anti-interventionist left expressed outrage at such a cynical move. Apparently their unhappiness and protest are reserved specifically and only for the U.S. Such is the intellectual handicap that seems to have stunted much of the anti-interventionist camp’s thinking on this subject: “Intervention” is only bad, terrible and worthy of physical protest when the U.S. is doing it. This just isn’t the case, particularly for Syria.

Of course, there remain a good number of critics who match their skepticism of American intervention in Syria with equal criticism of Russia, Iran and the Gulf states for that matter. But the overall reaction from the “anti-imperial left” regarding the trajectory of the Syrian conflict has left them with limited credibility to opine or demonstrate on the topic. This is the most obvious function of a deep-seated intellectual stagnancy that has acted as the primary framework with which to interpret global events: All conflict must be seen in light of American imperial tendencies, first and foremost. 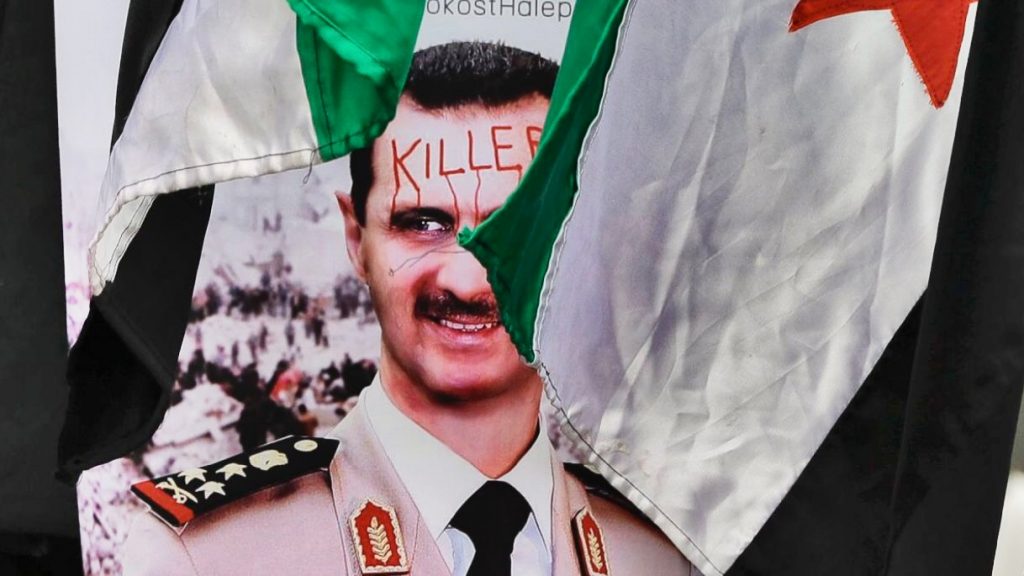 A poster at an anti-Assad protest in Romania. > Flickr/Zio Fabio

But no single, one-size-fits-all framework can be used to interpret and analyze all global events. Such events may break down into certain patterns here and there, but the specific and complex nature of each situation usually involves multiple variables that are contingent on even more factors. The way Russia and Iran perceive their own national interests have prompted their leadership to support Assad. Their actions have been contingent on such an interpretation of their interests and have helped facilitate the utter destruction of a country and its people. None of this has primarily to do with the U.S.

To have remained consistent would be to denounce Assad, his sponsors (particularly in the fall of 2015), and the U.S. intervention, few and far between as they’ve been in this conflict. Much of the anti-imperial left have done the first and the third, but have remained largely silent on Russian and Iranian involvement, which has been absolutely disastrous.

Many Muslims who’ve learned to calibrate their analyses of world events according the U.S.-is-evil-all-the-time-no-exceptions framework have also fallen into this ignoble category. Their positions are less a result of careful consideration and after the news out of Syria (in a critical way, given the wave of fake content and conspiracies that the situation has generated) than they are the conclusions of a hardened ideology. There are plenty of reasons to criticize and protest U.S. actions around the world, but to be unable to extend that same critical eye to other forces and powers is a serious blind spot that many leftists and Muslims must get out of.

The world’s evil has plenty of sources. And even a worldview that fixes the U.S. as the center of this evil shouldn’t always necessarily impede one from analyzing conflicts in a way that attributes blame in a fair and accurate manner, to all parties involved.